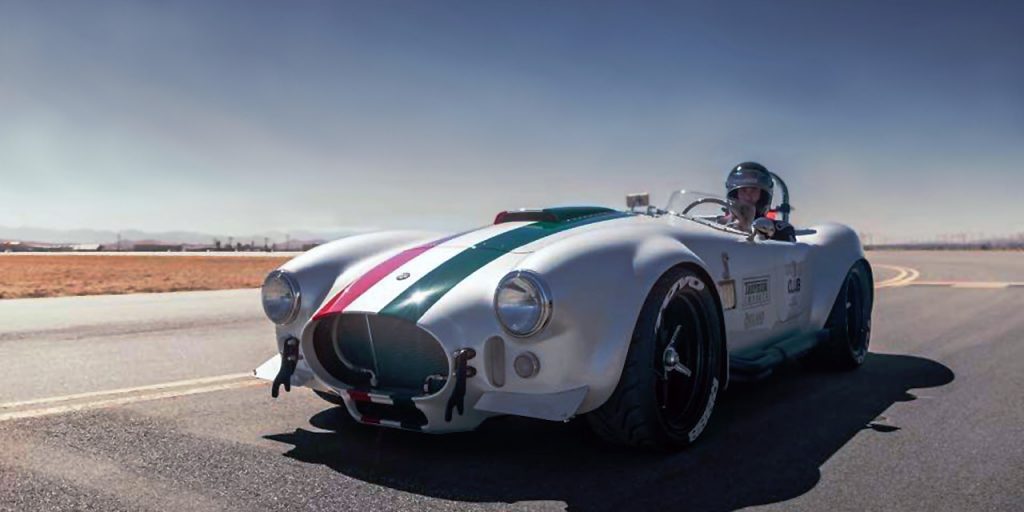 In the 1960s, Shelby American had a Le Mans problem; the Shelby Cobra roadster generated too much aerodynamic drag to excel on the long, high-speed Mulsanne Straight. To combat this, Carroll Shelby et al. devised the Daytona Coupe – a fixed-roof sportscar based on the same chassis and drivetrain. The new, enclosed cockpit was slippery enough that the car could hit much higher speeds at the Circuit de la Sarthe, paving the way for a GT-class win in 1964.

Yet as it turns out, one doesn’t quite need an enclosed cockpit to go fast; a Shelby Cobra replica from Superformance just set a blistering new speed record, hitting 201.1 miles per hour at the Mojave Air and Space Port. That’s the new highest top speed ever achieved with a road-legal Shelby Cobra, beating out the previous record of 198 mph set by Dick Smith back in 1967.

The Shelby Cobra replica in-question – a Superformance Mk III – is owned by one Ted Taormina. He calls the car the “Italian Job”, and had the car customized with stripes in the same colors worn by Italy’s national flag. It’s powered by a 690-horsepower 427 FE V8 from Shelby Engines, and body pieces like a rear diffuser, front dive planes, and a chin spoiler help keep the car glued to the road while aluminum undertray panels help smooth out the airflow underneath the car.

Taormina reportedly spent months preparing for his 201.1-mph run, topping out at 169 mph and 190.1 mph in earlier attempts. That said, it is a bit difficult to imagine his record standing for forty years like the one he surpassed.