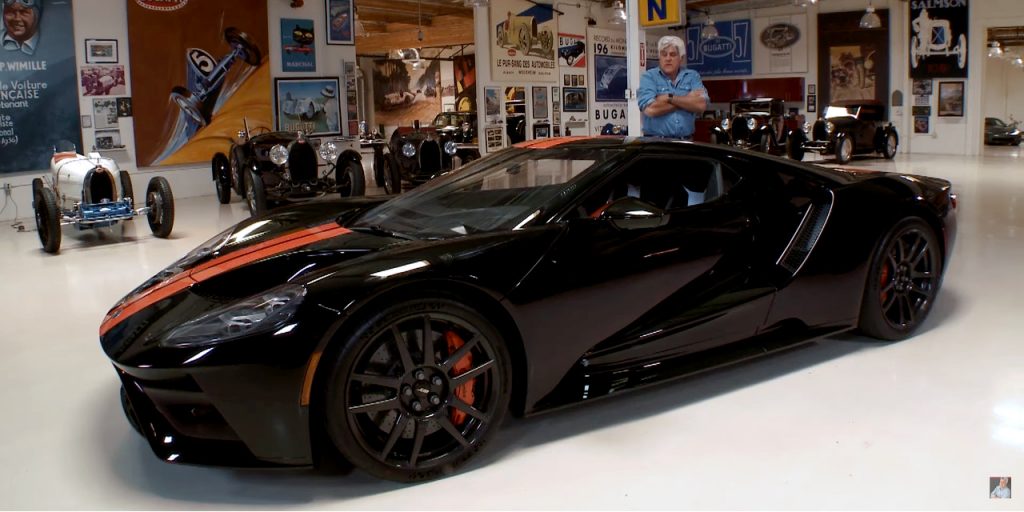 At long last, television personality and noted car enthusiast Jay Leno has delivered the very-special episode of Jay Leno’s Garage we’ve all been waiting for, delivering an in-depth tour of his own, personal 2017 Ford GT supercar.

Mr. Leno optioned his Ford GT with lightweight carbon-fiber wheels from Carbon Revolution – the same company that supplies high-tech wheels for the Shelby GT350R Mustang. Leno is no stranger to these wheels, incidentally; back in 2014, he featured Carbon Revolution Executive Director Brett Gass on an episode of Jay Leno’s Garage, testing out the company’s wares on a Porsche 911 GT3 RS. At the time, Mr. Gass said only that the company was in talks with an OEM, without disclosing which.

Like much else on the 2017 Ford GT, those carbon-fiber wheels are optimized to deliver superior performance by eliminating excess mass. Wheel mass matters because the lesser the unsprung mass – that is, mass that is not propped up by the suspension – the quicker the suspension can react. Furthermore, less rotating mass means the wheels can respond more quickly to directional changes.

Be sure to watch the latest episode of Jay Leno’s Garage above for the full scoop – or, if you’re impatient, skip ahead to about the 22-minute mark to see Leno take his 2017 Ford GT out for a drive.