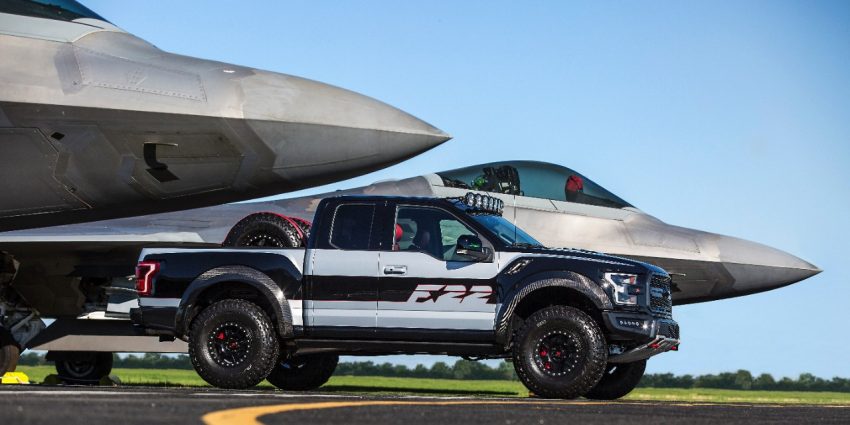 The Ford F-22 Raptor F-150, which takes its cues from the Lockheed Martin F-22 Raptor fighter jet, is notable for being the first custom-built Ford to auction at EAA AirVenture Oshkosh that isn’t a Mustang. It boasts 545 horsepower and 660 lb-ft of torque – 95 hp and 150 lb-ft more than the production F-150 Raptor – with a Whipple intercooler, custom Innov8 Racing beadlock-capable wheels, a roof-mounted LED bar, and special “F-22” exterior graphics.

The potent super-truck also features a carbon-fiber hood, fender flares, and fender vents from DeBerti, along with an upgraded brake package with upsized rotors and high-friction pads. The tires are Falcon Wildpeak all-terrains.

The Ford F-22 Raptor F-150 is the tenth custom vehicle Ford has donated to be auctioned in support of the EAA Young Eagles program. Last year’s car, a Shelby GT350 styled in honor of pilot Bob Hoover’s “Ole Yeller” P-51D Mustang, fetched $295k. Since 2008, Ford has raised more than $3 million for the Young Eagles with its one-off custom vehicles.