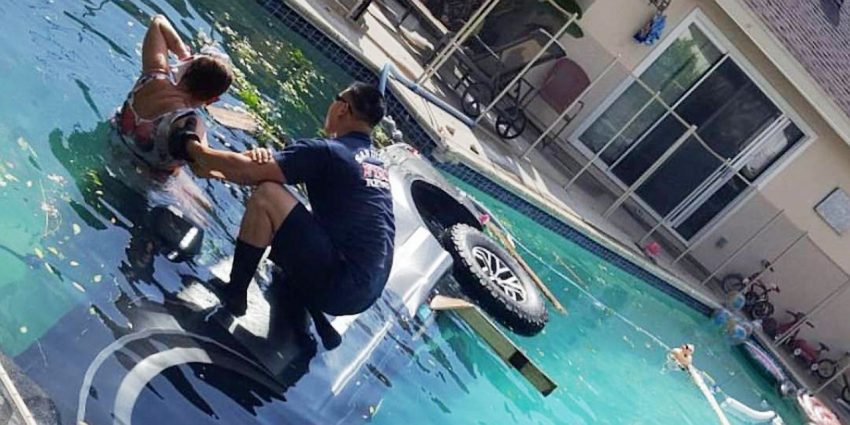 We know what you’re thinking, and no: this brand-new, 2017 Ford F-150 Raptor did not land in a backyard swimming pool in the course of doing typical Raptor things – driving quickly, jumping over curbs/stumps/small hills, etc. Instead, it seems most likely to have been the result of user error.

According to The Drive, on Friday, July 7th, a 68-year-old man and his wife drove this Ford F-150 Raptor to drop something off at their son’s house in San Diego, California, the man exiting the truck when they reached the destination while his wife remained inside the vehicle. It was at this point that the truck started to roll backward down a hill, sans driver, crashing through a yard and two fences before tumbling into a neighbor’s swimming pool, the woman still inside.

The truck fully submerged in water, the woman passenger had yet to emerge when, thankfully, a man named Gabriel Mejia ran to assist after hearing the commotion. He broke one of the F-150 Raptor’s windows with a brick and helped the woman out of the truck. She was then treated by by San Diego Fire-Rescue before being taken to the hospital.

While the 2017 Ford F-150 Raptor is touted as a capable, rugged off-road vehicle, we’d like to remind everybody that swimming pools are considered beyond the realm of what the truck was designed to traverse. We imagine it wouldn’t have much difficulty fording a wading pool, though…