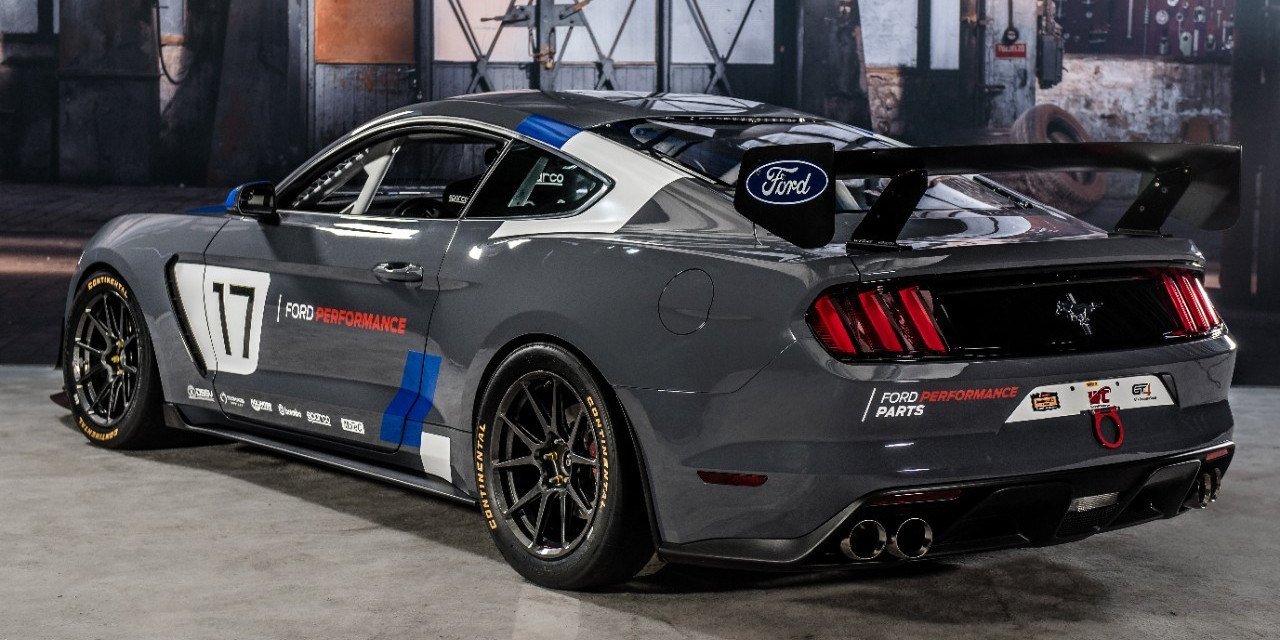 At last year’s SEMA Show in Las Vegas, Ford pulled the wraps off of the Ford Mustang GT4 – a complete, turnkey race car for privateer teams. The model is based off of Multimatic’s successful Shelby GT350R-C Mustang, which won the IMSA Continental Tire SportsCar Challenge in its class last year, although there are some key differences.

Thanks to the investigative work of Mustang6G forum user “Epiphany”, we now have access to more details about the Ford Mustang GT4 than ever before.

First, there’s the engine. It’s true that the GT4 is powered by a normally-aspirated, 5.2-liter V8 like the Shelby GT350R-C, but in this application, the motor reportedly contains a cross-plane crankshaft – not a flat-plane. As you’ll recall, the flat-plane crank used in the production Shelby GT350’s 5.2L Voodoo V8 was a pretty big deal, as that style of crank is much more readily associated with Ferrari than with any American automotive brand.

The Ford Mustang GT4’s engine is supplied by Roush Yates – the same company that builds Ford’s NASCAR engines – and utilizes the regular old Mustang GT’s air filter box and intake manifold. It’s backed by a Holinger sequential transmission rather than the Tremec TR3160 6-speed used in the GT350R-C, and according to Epiphany, the power is sent rearward by a one-piece, aftermarket aluminum driveshaft to a Torsen differential rear with factory Ford half-shafts.

As For The Rest…

The body looks just like that of the production Shelby GT350R, except that here, it’s seam-welded and rocks an FIA-compliant roll cage. Each example of the Ford Mustang GT4 leaves the factory shod in white, and teams are left to lay their unique liveries over that. Multimatic has fitted the car with numerous custom carbon-fiber pieces, including a massive front splitter, front dive planes, hood, and door skins.

As for the suspension, Multimatic’s own DSSV (Dynamic Suspension Spool-Valve) dampers with adjustable bump and rebound sit at all four corners, and a pair of Multimatic camber plates sit perched atop each of the front strut towers. The whole system grants teams as much latitude as possible to dial in the suspension right where they want it.

The Ford Mustang GT4 is already something of a success for Ford Performance, having taken pole position in its very first race, and winning its second-ever event. For even more details and a bevy of high-quality photographs, stop by Mustang6G.com.