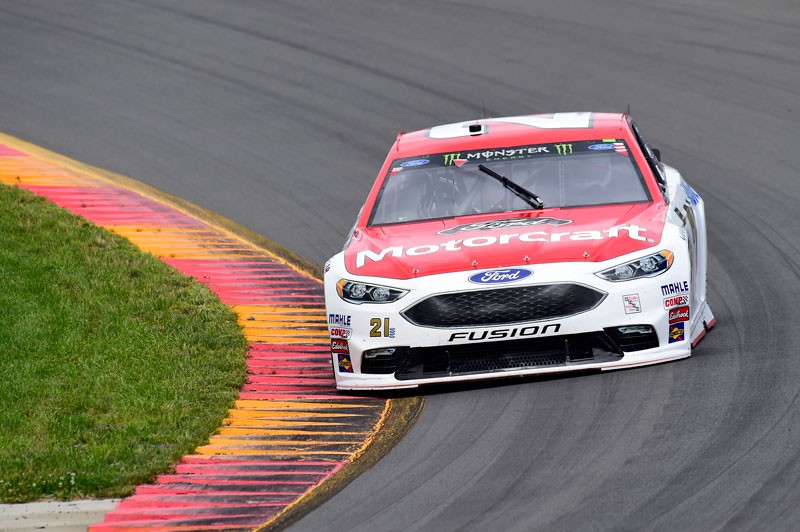 Of one of the two road courses on the NASCAR Monster Energy Cup schedule, Ford had a great showing at Watkins Glen International Raceway, ending the race with three Ford powered drivers in the top ten. The No. 14 of Clint Bowyer, the No. 41 of Kurt Busch, and the No. 21 of Ryan Blaney came in fifth, sixth, and eighth respectively.

Ford powered driver Brad Keselowski looked to be a contender for a top ten at the very least, regularly challenging the front of the grid throughout stage one and two. In the final stage, a clash with pole sitter Kyle Busch in the bus stop chicane caused Keselowski to flat spot his tires and pit, putting him off strategy relative to the front runners. Despite leading a fair number of laps in the final moments of the race, Keselowski ultimately ended the race in fifteenth after pitting from the lead for a splash of fuel. The stop was necessary to get to the end of the race, but the miscalculation in fuel strategy costed him a potential win. After Keselowski pit, eighth place finisher Ryan Blaney took the lead for two laps. Similar to Keselowski’s situation, Blaney also had to pit for a splash of fuel and relinquished the lead to race winner Martin Truex Jr.

At the end of stage three Martin Truex Jr. took the win, owing it all to a masterful fuel strategy call by his crew chief Cole Pearn. Second was the disappointed Matt Kenseth who needed a win to guarantee himself a playoff spot. The third and final podium position belonged to rookie Daniel Suarez who took the first stage win of his career in stage two.

In the regular points standings, Kevin Harvick still holds the highest position for all Ford drivers in fourth overall. Two positions down, Keselowski is sixth in the overall standings boasting less regular season points but more playoff points than Harvick. Clint Bowyer is the final Ford driver in the top ten, but with no wins, he sits just outside the bubble in terms of playoff point standings.