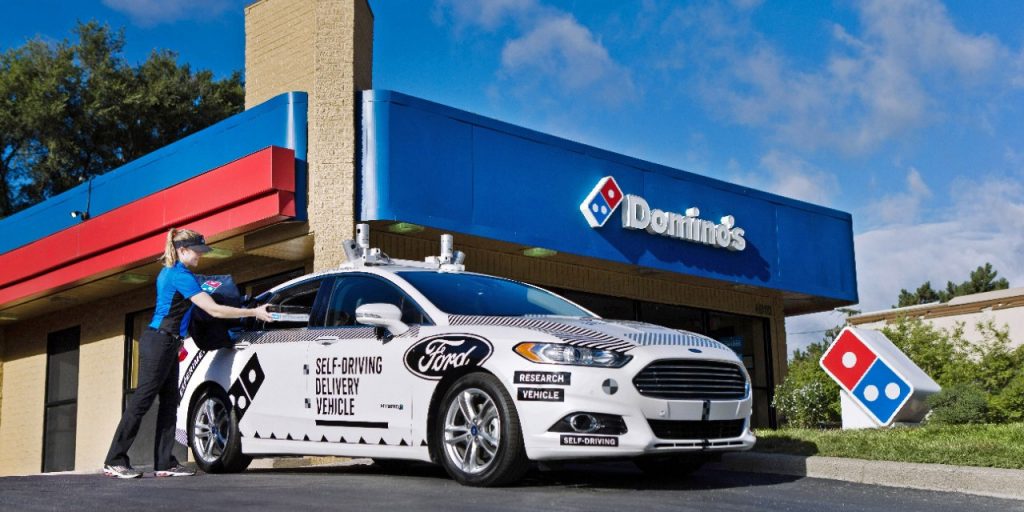 Ford Motor Company is working with Domino’s Pizza to try and better understand the role that autonomous vehicles could play in food delivery in the future. The companies are mostly interested in gauging consumer response to the self-driving, food-delivering vehicles, so over the next few weeks, randomly-selected Domino’s delivery customers in Ann Arbor, Michigan will have the opportunity to receive their deliveries via a Ford Fusion Hybrid Autonomous Research Vehicle. Ford safety engineers and researchers will staff each vehicle, but the customer’s interaction will be solely with the hardware.

Customers who receive deliveries from one of the Ford self-driving Domino’s vehicles will receive a special code to access the car’s Domino’s Heatwave Compartment to get their pizzas. The prototype compartment was created by Roush Enterprises, which previously worked with Domino’s to create the Domino’s “DXP” – a specially-upfitted delivery vehicle with a warming oven and an 80-pizza carrying capacity.

“As we increase our understanding of the business opportunity for self-driving vehicles to support the movement of people and goods, we’re pleased to have Domino’s join us in this important part of the development process,” says Ford VP of Autonomous and Electric Vehicles Sherif Marakby. “As a company focused on the customer experience, Domino’s shares our vision for a future enabled by smart vehicles in a smart environment that enhance people’s lives.”

Ford has already announced that it plans to produce a fully-autonomous vehicle by 2021, but that it will be reserved for commercial applications like ride-share and ride-hailing. Food delivery seems like another natural application for the fleet-intended vehicle.

Ford To Partner With Postmates, Offer Autonomous Delivery Of Just About Everything