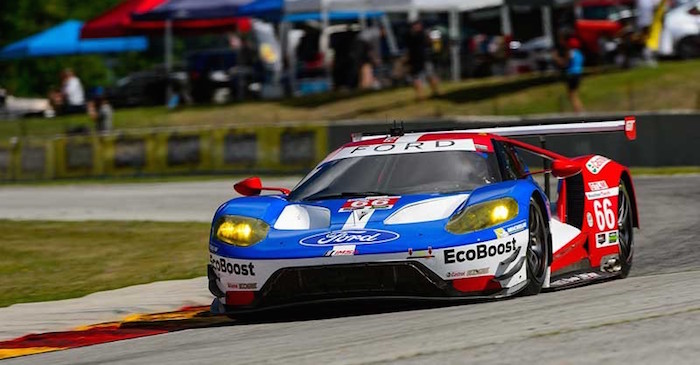 It was a day to remember for Nissan, which took their first win of the season and broke the streak of Cadillac DPi wins in the IMSA Weathertech Championship. But in lower GTLM class, Ford Chip Ganassi Racing would also end the day with a favorable result as the No. 66 Ford GT of Joey Hand and Dirk Mueller took the class win. The No. 67 Ford GT of Ryan Briscoe and Richard Westbrook managed a hard fought third place finish, solidifying two podium finishes and a decent points haul for Ford Chip Ganassi Racing.

The class win came down to a pass Hand made on the No. 912 Porsche 911 RSR driven by Laurens Vanthoor after a restart with a little under 40 minutes on the clock.

“We had some bad luck [earlier in the season], but moving forward hopefully we can carry this momentum to a championship,” Hand explained. The No. 912 Porsche 911 RSR would ultimately finish the race second in its class.

A championship win is very much in the cards for the No. 66 Ford GT as the win at Road America put them a mere five points shy of their championship rivals at Corvette Racing. The No. 3 Corvette C7.R ended the race in fourth place bringing their points tally to 236 points. The No. 66 Ford GT sits at 231 points. Sixth at Road America but third in the overall points, the No. 25 Team RLL BMW M6 sits just one point shy of the No. 66 with a points tally of 230 points.

The spread is tight going into the next race at Virginia International Raceway and with the three races left in the season, it’s still anyone’s guess as to who will take home the GTLM championship title.