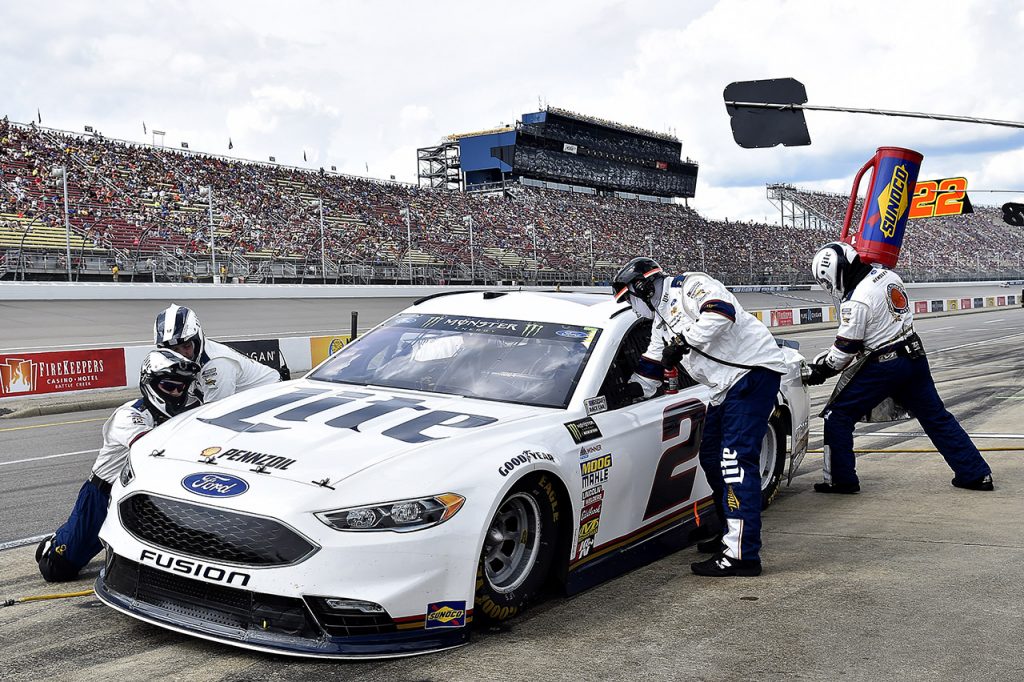 Trevor Bayne in the No. 6 Ford Fusion put in a consistent drive and made up 16 positions to cross the checkered flag in fifth at Michigan International Speedway.

A weekend that showed a lot of promise for the Ford entries ended with a singular top ten finish. The No. 2 Ford of  Michigan-native Brad Keselowski had a dominant showing, starting from pole and leading 105 laps throughout the race. Keselowski collected a stage one win and stage two second place along the way, making him look like a solid contender for a much needed win. Unfortunately for him, a caution flag caught him out and left the team with a choice between going to the back of the pack on new tires or holding track position on an older set. Keselowski’s team chose the latter and the pack gradually swallowed him, leaving him to cross the checkered in seventeenth place.

“It just didn’t come together there at the end, but it was nice to lead a bunch of laps,” Keselowski lamented. “That was good and something I was really proud of, but I just didn’t have enough to really run with the 77 (Erik Jones) and the 78 (Martin Truex Jr.).” A win would have put Brad Keselowski second in the playoff standings.

For Ford, Brad Keselowski remains fourth in the playoff standings along with Ricky Stenhouse Jr. in fifth, Kevin Harvick in seventh, Ryan Blaney in ninth, and Kurt Busch in tenth. Clint Bowyer and Joey Logano remain on the bubble in seventeenth and eighteenth respectively. A win would give either of them a playoff spot and shake up the standings tremendously. Despite a lackluster performance in Michigan, Ford still has a solid showing in the playoff standings.