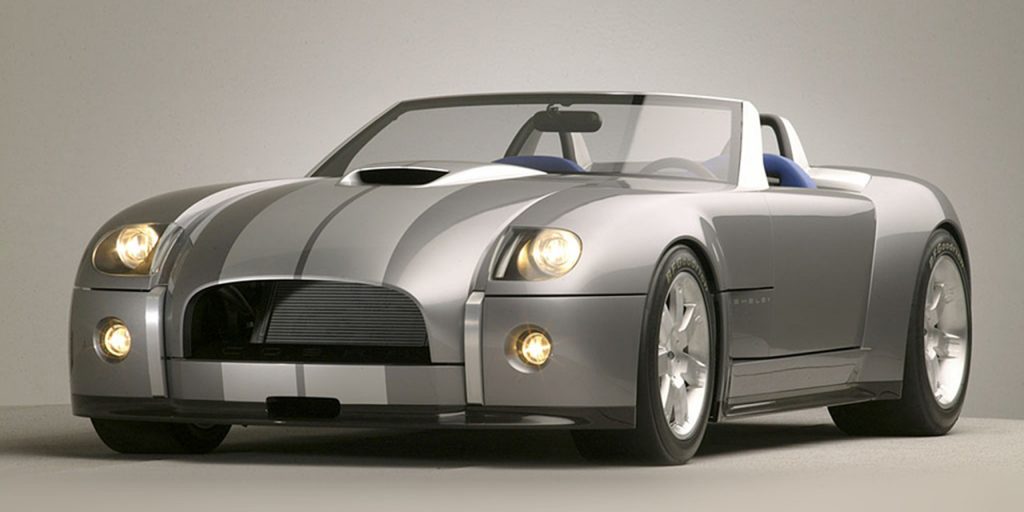 Ford’s retro-modern Shelby Cobra concept from 2004 will find a new home this November after it crosses the auction block at the 2017 GAA Classic Cars auction event. The concept packs a 6.4-liter V10 under its hood, capable of up to 605 horsepower, and distinctive styling penned under the direction of J Mays.

Mays, who was partly responsible for the design of cars such as the Volkswagen New Beetle, 2001-’05 Ford Thunderbird, and 2005-’06 Ford GT, practically wrote the book on what he called “retrofuturism” in automotive design.

Sadly, because the 2004 Ford Shelby Cobra is only a concept, Ford for liability reasons cannot allow the car’s future owner to drive the vehicle on public roads. It’s been rendered undriveable for that reason, although according to Classic Cars, the engine is fully functional. The concept weighs in at just over 3,000 pounds, lacking a roof, radio, and side/back windows.

Proceeds from the sale of this singularly unique Ford Shelby Cobra concept will go to the Henry Ford Estate to help pay for the restoration of Fair Lane – the historical estate in Dearborn, Michigan that once belonged to company founder and automotive pioneer Henry Ford.

Although not Ford’s first dabble with retro-modern styling, the 2004 Ford Shelby Cobra concept stands alone as perhaps Ford’s most committed, bold vehicle to come out of the retrofuturism school of car design. Love it or hate it, the concept is a unique, unmistakable part of Ford history. We don’t anticipate it’ll have any trouble selling – even though you can’t quite drive it.

Lunch With Ford CEO Jim Farley Being Auctioned For Charity