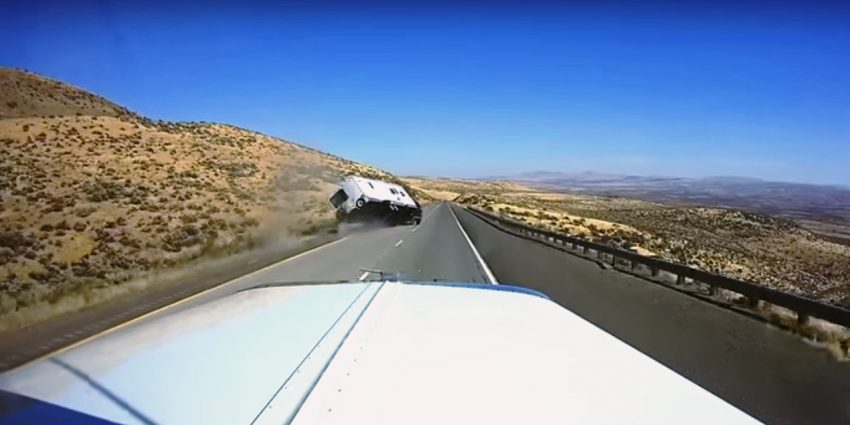 Towing can occasionally be rather dangerous, as was recently demonstrated in a dashcam video captured and published by YouTube user Ramathorn1985. Embedded above, the clip shows a black Ford Excursion with an attached travel trailer blowing past a semi at high speed before beginning to oscillate left and right uncontrollably. The swaying grows greater and greater as the Ford Excursion makes its way down the road, finally ending in the SUV being whipped off-road and rolling over violently.

The father and his two sons in the Excursion were reportedly okay after the accident, which took place on I-82 in Washington state. That said, the driver of the semi does use some expletives while the whole thing is unfolding (and understandably so), so viewer discretion is still advised.

As for what caused this unfortunate crash, there are a few different contributing risk factors that all likely played a role. First, there’s the speed that the Ford Excursion is seen trying to maintain, which is greater than we’d ever advise while towing such an immense trailer. Second, there’s the large surface area of the trailer, which makes it likely to catch wind and be pushed off its trajectory. And third, from the looks of things, there is a lot hanging off the back of the trailer; having to shift the center of mass of whatever you’re towing toward the rear is never ideal.

We’re glad everyone was safe after the accident, and hopefully, the video can at least serve as a reminder to practice safe and smart towing at all times.