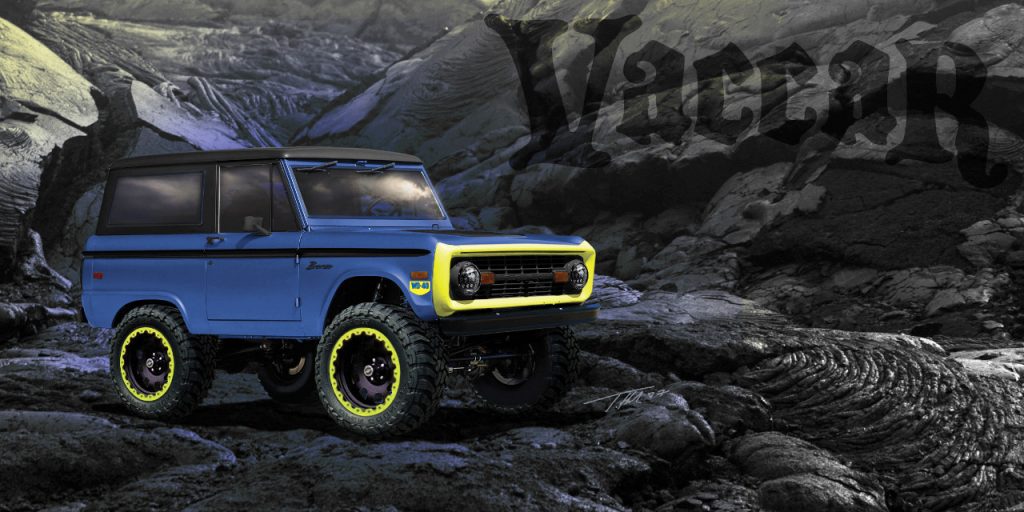 The Ford Bronco has been nabbing more than its fair share of headlines lately, what with the off-road-capable SUV slated to return by 2020 built on the same full-frame platform as the Ford Ranger mid-size pickup truck. With interest in the discontinued utility vehicle at a new high, Aaron Vaccar and The Vaccar Company have teamed with WD-40 Company – makers of one of the most well-known penetrating lubricants on the market – to build a custom Ford Bronco based on the original 1966 model for the 2017 SEMA Show in Las Vegas.

The one-off SUV will draw on one of Ford’s range of turbocharged EcoBoost gasoline engines for power.

The WD-40®/SEMA Cares Boosted Bronco will make its public debut October 31st at the WD-40 Brand booth on the showfloor, and will be auctioned off next year, with proceeds going to the SEMA Cares program. SEMA Cares will donate the funds to benefit Childhelp®, which provides services to abused and neglected children; and the SEMA Memorial Scholarship Fund, which provides scholarships for students looking to enter the vehicle aftermarket.

Rendered above, the WD-40®/SEMA Cares Ford Bronco will wear a color scheme inspired by the iconic blue-and-yellow can of WD-40’s flagship product. It’s definitely not a shout-out to the University of Michigan. That school’s colors don’t include yellow; they include “maize”. Keep it straight.

“The WD-40/SEMA Cares Boosted Bronco allows us to pay tribute to traditional hot-rodding standards of execution and finish with a first of its kind vehicle,” says Aaron Vaccar. “The EcoBoost drivetrain will give the cult classic a modern spin and turbocharged power and efficiency for the future. There could not be a more iconic brand than WD-40 Brand to partner with on a vehicle sure to generate excitement from Bronco, off-road and automotive enthusiasts nationwide.”