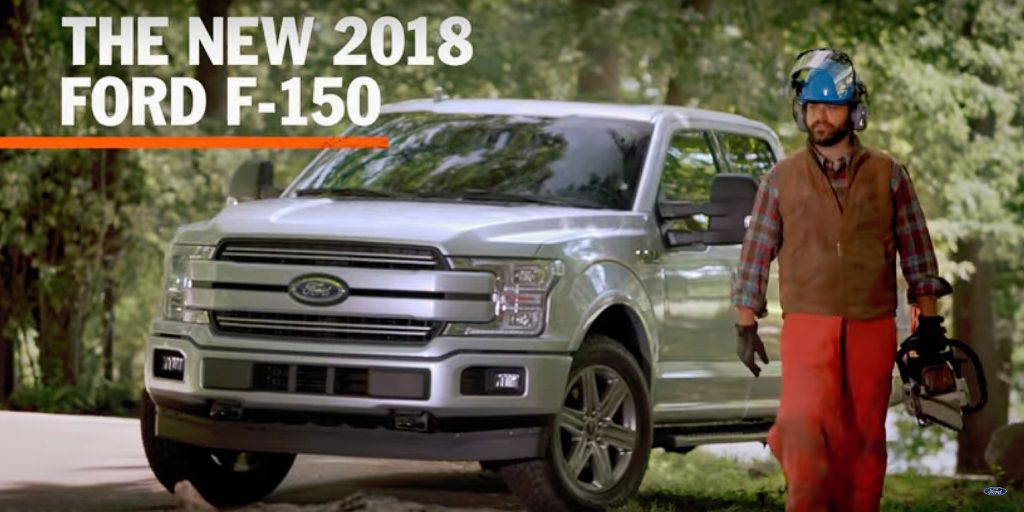 Advertisements for the 2017 Ford Escape crossover and 2018 Ford F-150, respectively, had the second- and third-greatest reach among online automobile ads this week, according to data from Visible Measures. The Escape was refreshed for the 2017 model year, premiering new available technologies like Ford SYNC Connect, and the F-150 was updated for 2018.

The ad for the 2017 Ford Escape that took the No. 2 spot on the charts is a simple “Head to Head” spot comparing the compact CUV to Honda’s 2017 CR-V, looking at qualifications like towing capacity, available power, and the Escape’s Enhanced Active Park Assist. It enjoyed a reach of 5,612,010.

Just behind it in third with a reach of 5,245,950 was a brand-new ad for the 2018 Ford F-150 that features the voiceover work of Denis Leary. In it, a man in a hard hat tries to cut through a fallen tree with an electric bread knife, while Leary remarks: “You need the right kind of power to get the job done.” Another man then walks toward the tree, away from an F-150, with a proper chain saw in hand, cutting swiftly through the tree while Leary talks about the F-150’s available best-in-class towing and payload ratings.

Neither ad is likely to make your day, but they each get their respective points across well enough.

Incidentally, ahead of both ads with a reach of 6,232,512 was a spot for the 2018 Nissan Titan that features an older-model Ford F-150 that the driver has managed to get stuck in the mud. He’s rescued later in the commercial by a man in a Titan, but not before opening the hood of the stuck F-Series and pleading with the ponies living in the engine bay to power through and get him unstuck, singing a made-up song called “Pretty Pretty Ponies” to appease their whims. Exactly how a traction issue is supposed to be resolved with more power is beyond us, but hey, it is the most entertaining of the three spots.