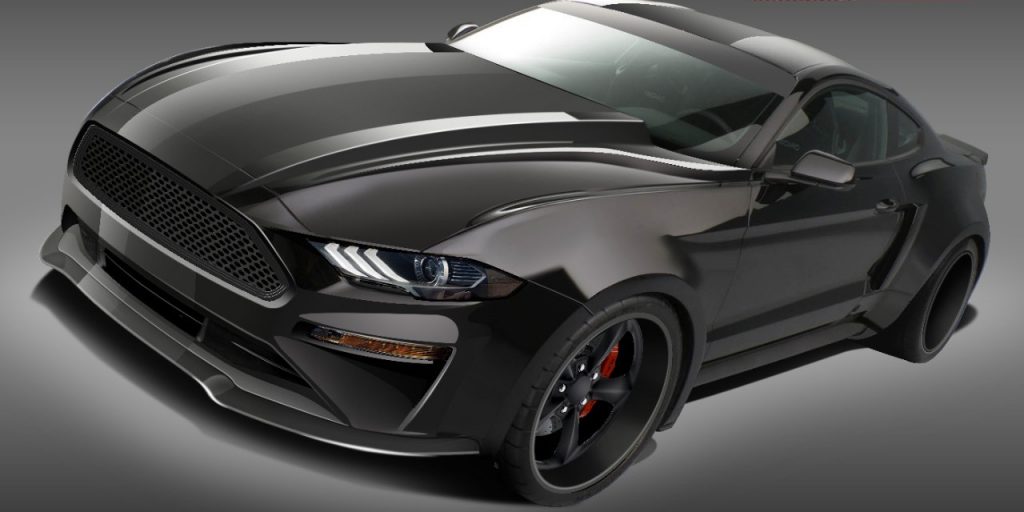 After winning numerous awards at the 2016 Specialty Equipment Market Association Show, including a “Young Gun” Award and a Top 10 result in the annual Battle of the Builders, Brad DeBerti and DeBerti Design are returning this year with a particularly sinister-looking build based on Ford’s updated, 2018 Mustang. The rendering above “doesn’t do the car justice,” Brad admits on his Facebook page, but based on the list of modifications, we’ve little doubt it will turn out to be a show-stopper.

Starting with a 2018 Ford Mustang GT coupe with a 6-speed manual transmission, DeBerti Design fitted the car with a TS Designs wide-body kit in order to accommodate massive, 14-inch-wide Forgiato wheels in back (9.5-inch front) with Mickey Thompson tires. A custom hood, designed by Brad DeBerti and fabricated by Ice Nine, has been fitted, and a DeBerti billet grille transforms the appearance of the nose. A Ford Licensed Accessories rear wing produced by Air Design alters the look of the rear, and Bullseye Retro custom headlights and taillights give the Mustang still another unique styling cue.

Under the skin, this 2018 Ford Mustang by DeBerti Design boasts a Ford Performance/Borla exhaust, 9-inch Ford third member by Currie Enterprises, and US Gear 9-inch 3.70:1 ring and pinion. The rear of the car rides on a Watson Racing independent rear suspension, and adjustable H&R Performance springs and dampers sit at all four corners. Ford Performance brakes up the stopping power.

Climb aboard the DeBerti Design custom SEMA Mustang build and you’ll find Ture Carbon interior panels, and Kicker audio from Ford’s catalog. A custom DeBerti roll bar is fitted, just in case, and as on the exterior, Sherwin Williams paint has been applied.

DeBerti Design’s 2018 Ford Mustang GT build will be revealed in-person at the 2017 SEMA Show in Las Vegas, which starts at the end of the month. Stay tuned for the latest Ford SEMA news.