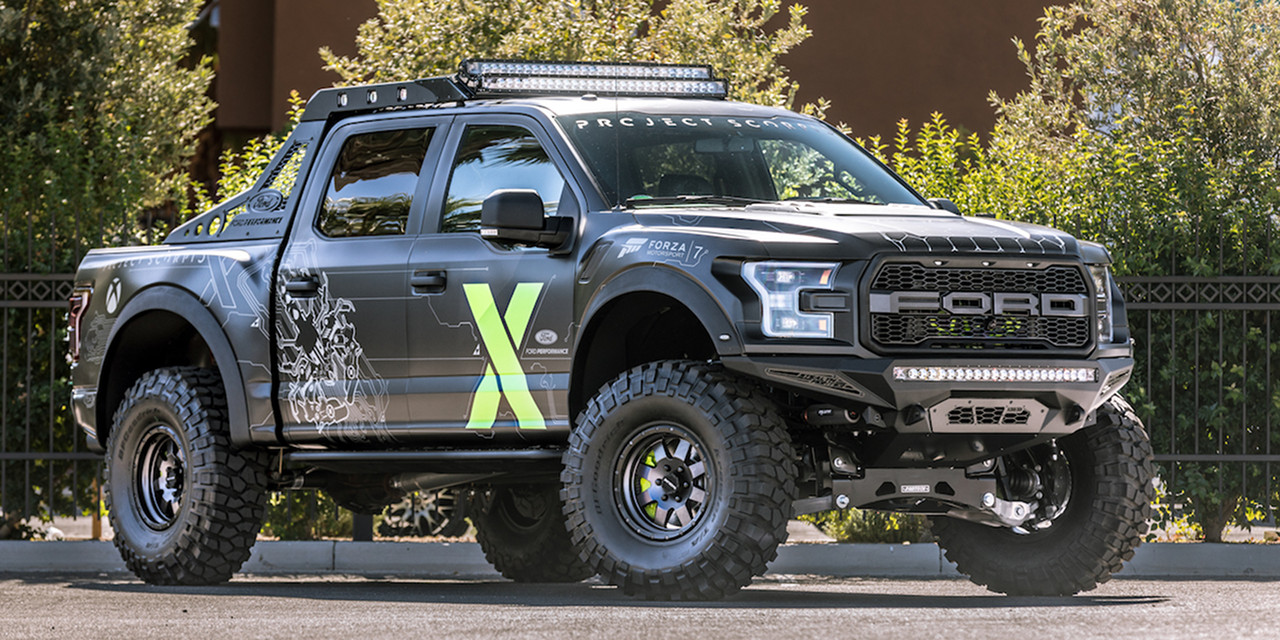 Ford Performance and Microsoft have joined forces to celebrate the impending release of the high-end XBox One X gaming console on November 7th by producing this customized “XBox One X” version of the new F-150 Raptor performance off-road truck. The very-special truck will bow at the 2017 Specialty Equipment Market Association Show in Las Vegas, which kicks off Tuesday, and early next year, it will actually become available to drive (virtually) in Forza Motorsport 7.

Like the XBox One X, this very-special custom Ford F-150 Raptor represents a performance upgrade over the original, featuring an uprated intercooler from Addictive Desert Designs, Ford Performance Borla exhaust, Fabtech six-inch lift kit, and powerful Alcon brakes. Its signature exterior design is notable for its matte-black finish and large, green “X” graphic, not to mention its custom wheels, bumpers, chase rack, and LED lighting. The cabin upholstery is inspired by the new Microsoft console’s internal codename, “Project Scorpio”, which appears at the top of the windshield as a banner graphic.

“The Xbox One X is the world’s most powerful console,” says Ford Performance Marketing Manager Henry Ford III. “It’s the benchmark in the console gaming world, while F-150 Raptor is its equivalent in the world of pickup trucks.”

Ford’s partnership with the Forza Motorsport franchise stretches back to 2005, to the release of the very first title in the series. Since then, numerous Ford products have been showcased by the games, and the Ford F-150 Raptor and Ford GT supercar have even been featured as cover art.