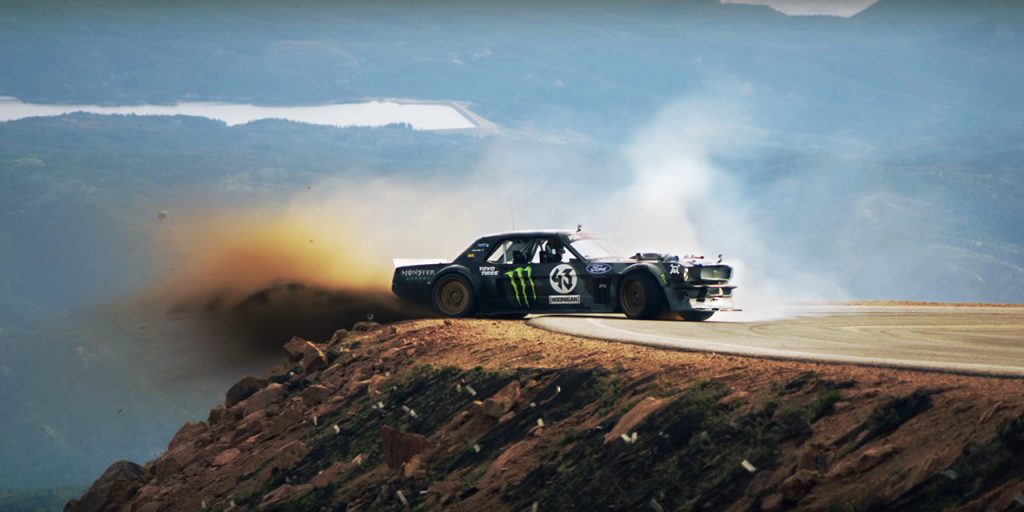 In case you missed it, Toyo Tires last week released “Climbkhana”: a splendid, 9-minute cut of pro Rallycross driver Ken Block hooning his way up Colorado’s famous Pikes Peak in his 1,400-horsepower Hoonicorn V2 Mustang RTR. The video is very much in the same spirit as Block’s Gymkhana series, except the car has been cranked up to eleven, and the stakes raised significantly by the presence of numerous dangerous drop-offs.

The “Hoonicorn V2” Ken Block drives in this piece was revealed late last year, built from Block’s already-bonkers, 845-horsepower, all-wheel-drive Hoonicorn Mustang RTR. The extra grunt was unlocked with a pair of Garrett turbochargers and methanol fueling – a combination that contributes massive, shooting exhaust flames to the mix.

Climbkhana‘s release was pushed back a tad from its planned Summer-2017 release date for unknown reasons. Toyo Tires is a relatively new sponsor to Ken Block and the Hoonigan Racing Division, with a multi-year partnership deal announced back in February, 2016. Assuming the deal produces anything else remotely as exciting and fun to watch as Climbkhana, it will have been a home run.