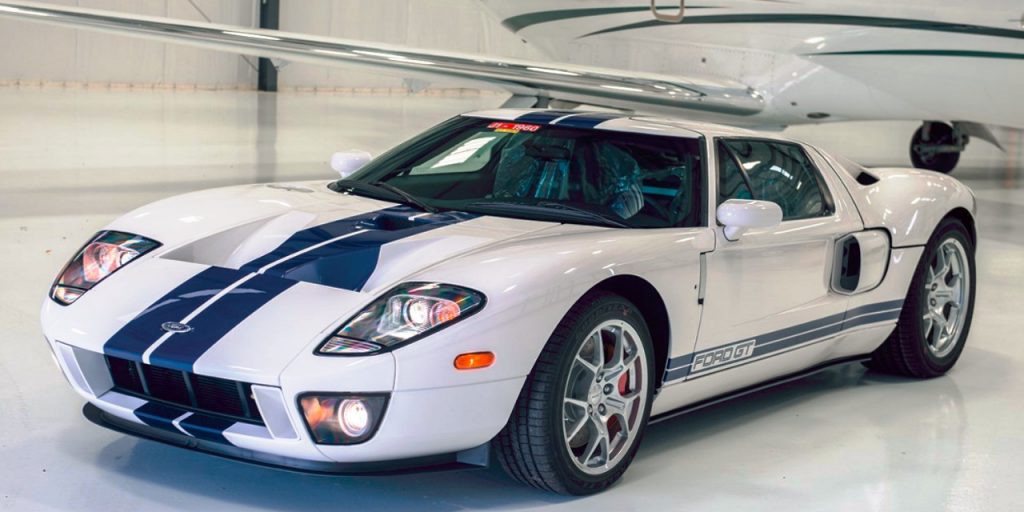 The new Ford GT supercar is great and all, but with a planned production run of just 1,000 units, it’s almost unfathomably exclusive. That’s left many well-to-do fans and would-be buyers to chase after the discontinued first-generation car, which was produced in numbers of more than 4,000 between 2004 and 2006. After all, while it may not have a 24 Hours of Le Mans of its own, it is a lightweight, 550-horsepower supercar that can trace its roots back to the four-time Le Mans-winning GT40.

Prices for the previous-generation 2004-2006 Ford GT have been creeping ever upward over the past several years, and we have to imagine that this low-mileage example from 2006 will fetch a princely sum when it sells at RM Sotheby’s Ft. Lauderdale next year. The white supercar with blue stripes wears just 10.8 miles on the odometer, and its interior still wears much of the original protective plastic. According to Top Gear, the car was ordered with three of the four options then-available on the Ford GT: forged BBS alloy wheels, red brake calipers, and the aforementioned blue racing stripes. Its white exterior finish puts it on a short list of just 726 examples that were ordered in that color over the course of production.

This 2006 Ford GT will be auctioned with no reserve in April next year, and it’s expected to fetch between $300k and $350k. We don’t imagine it will have much difficulty getting there.