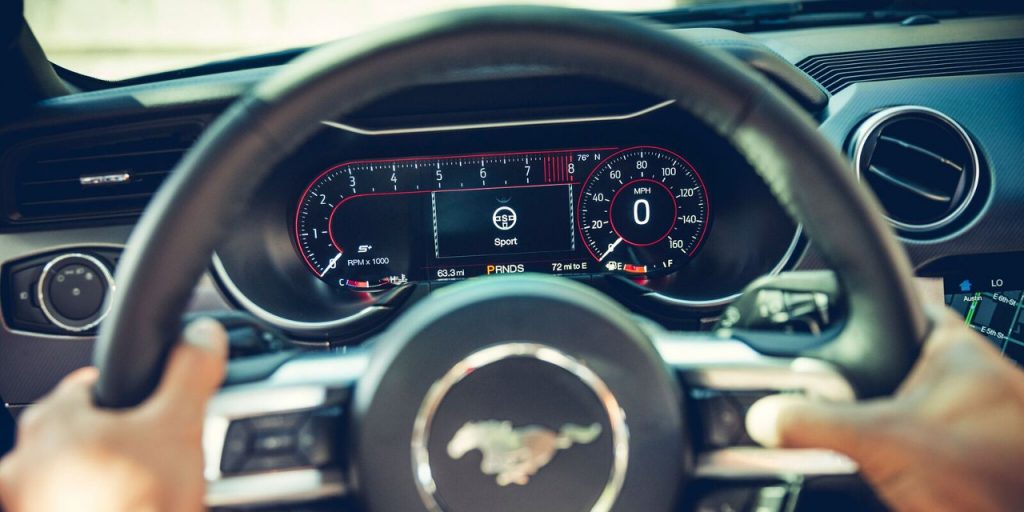 Here at Ford Authority, we rather dislike digital instrumentation in new vehicles. Such displays are usually gimmicky, and they have a tendency of looking dated before the equipped vehicle ever has the chance to leave the lot. No one wants their 2018 model-year vehicle equipped with a gaudy gauge screen that looks as though it’s powered by Windows 95.

But Ford managed to challenge our notions of just how good a digital instrument panel could be with the $450k Ford GT supercar, crafting something that was too clean-cut and simple to look obviously dated. Now, they’ve done it again with something a bit more attainable: the 2018 Ford Mustang.

Available on both the Ford Mustang EcoBoost and Mustang GT, the new digital instrument panel is actually 12.4 inches diagonally, and uses simple, high-contrast design sensibilities like those that guided the creation of the Ford GT’s new screen. Committed to crafting something that would work for a majority of users, Ford actually studied the human eye and assembled a core team with members experienced in video game development – another arena where uncluttered, easy-to-interpret graphics are key.

After over 2,000 hours of development from the Ford team, the end design is as quick and intuitive to read as any set of analog gauges – perhaps more so. The virtual needles incorporate “comet tails” to make tracking movement easier, and the design offers several different modes catered to suit specific drive modes – again, not unlike the unit in the Ford GT.

If it’s a manual-equipped Ford Mustang you’re driving, might we recommend selecting one of the design modes with a massive tachometer along the top of the screen, like Sport (shown above) or Track? It makes rev-matching downshifts a cinch.

In addition, the color scheme can be customized, with 900 different unique combinations available – perfect for properly honoring the school colors of your alma mater. An array of ancillary gauges can be added or removed, too, including: boost (Ford Mustang EcoBoost) or vacuum (Mustang GT), air/fuel ratio, inlet air temp, cylinder head temp, and voltage.

The digital instrument panel option in the 2018 Ford Mustang represents one of those rare instances where the LCD option is easier to read, better looking, and more useful than the usual gauge cluster. Should more automakers start to offer digital instrumentation in their new vehicles, they’d do well to draw on the Mustang’s panel for inspiration.