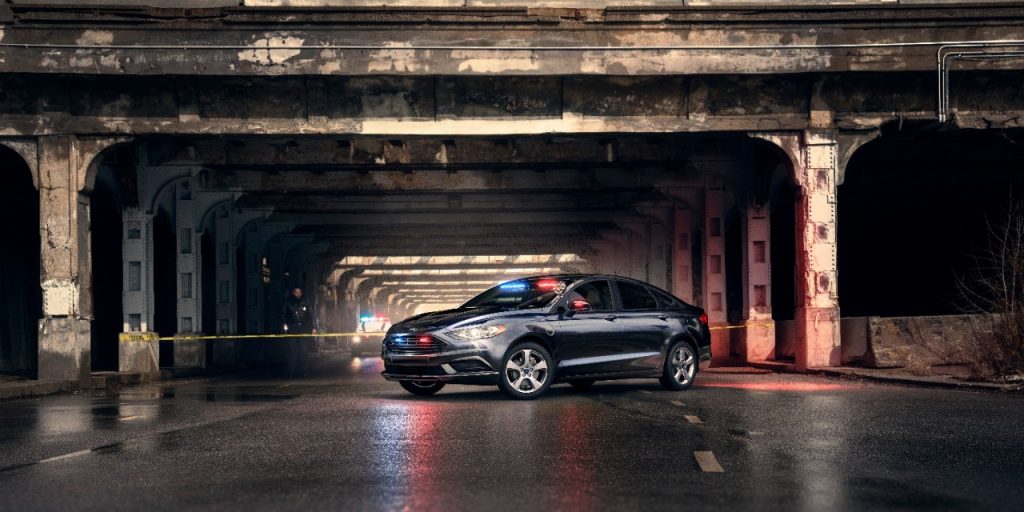 Ford Motor Company today revealed a new version of the Fusion Energi plug-in hybrid for government personnel, dubbed the “Special Service Plug-In Hybrid Sedan.” Like the Ford Police Hybrid Responder Sedan revealed in April, the new PHEV gives law enforcement a more fuel-efficient option with significantly lower fueling costs. Unlike that car, the Special Service Plug-In Hybrid Sedan isn’t pursuit-rated, which means you’re not likely to ever see one take chase after a hot-footed perp or get pulled into a high-speed pursuit on the interstate.

Instead, the new PHEV is aimed at police and fire chiefs, detectives, and other personnel who aren’t liable to require a pursuit-rated vehicle. It’s fitted with the same 7.6-kWh lithium-ion battery pack as the consumer-grade Fusion Energi, giving it the option of pure-electric propulsion at speeds of up to 85 miles per hour, and an electric range of up to 21 miles on a full charge. A 3.3-kW charger is onboard, allowing it to charge in as little as 2.5 hours on 240 volts.

The real changes come in the form of heavy-duty cloth front seats with reduced bolsters, a reinforced top tray for mounting equipment, a metal console mounting plate, rear anti-stab plates, and easy-to-clean vinyl seats and flooring in the second row. An auxiliary power box is mounted in the trunk for running miscellaneous accessories, and red-and-white task lighting is located in the overhead console. A driver spot lamp, trunk storage vault, trunk ventilation system, and rear-door disabling are all available as options.

Ford Police Brand Marketing Manager Stephen Tyler says the new Special Service Plug-In Hybrid Sedan is “the first Ford police vehicle that can potentially get through an entire shift using no gasoline whatsoever,” which could drastically reduce the total cost of operation over the life of the vehicle.

“Anyone can plug this in to any wall outlet to run gas- and emissions-free on battery-only operation,” Tyler says.

Ford will start taking orders for the new plug-in hybrid next month, with deliveries commencing next summer.