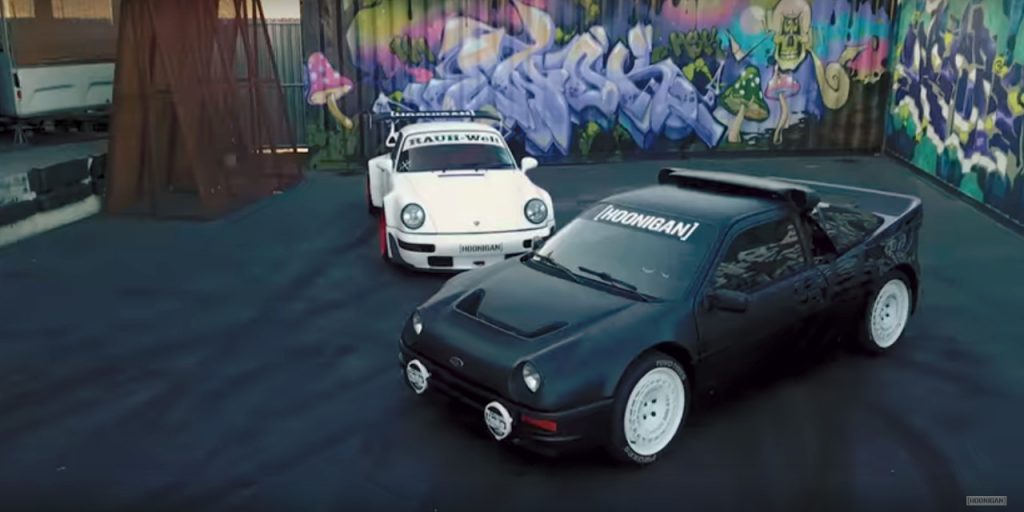 The Ford RS200 has got to rank pretty high up on any rally fan’s fantasy car list, and its allure hasn’t escaped Ken Block. The rallycross driver and star of the Gymkhana YouTube series owns a 1986 example of the high-powered, all-wheel-drive Ford RS200, which he brought to the Hoonigan “Donut Garage” for a bit of a walkaround/showing-off.

The Ford RS200 was built in very small numbers as an homologation special during the 1980s, to give Ford something to run in Group B rally competition. It had a mid-engine, AWD layout, with plenty enough power from a turbocharged four-cylinder engine to haul its lightweight fiberglass body around with gusto. Ken Block’s example is an extra-rare “Evolution” model, which received a larger, more highly-developed 2.1L engine, reportedly capable of somewhere in the neighborhood of 600 horsepower.

Ken Block admits in this video that the Ford RS200 is his “favorite car of all time,” which is high praise indeed from a man with an AWD ’65 Mustang with 1,400 horsepower.

Be sure to catch the latest Hoonigan “Daily Transmission” video above.