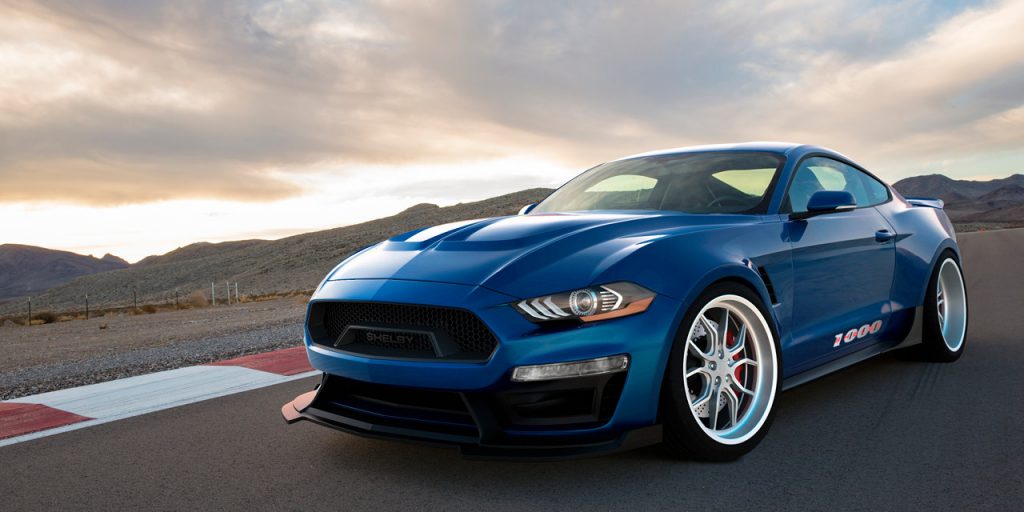 At the 2017 Specialty Equipment Market Association Show this week, Shelby American announced the official return of the legendary Shelby 1000, based on the 2015+ Ford Mustang (S550). But where the Shelby 1000s of yesterday were most at home in the quarter-mile, the renowned Shelby firm engineered the newest version to thrive on a race track.

“The 2012 through 2014 model year Shelby 1000 was based on the 5.8L Ford Shelby GT500, and while we significantly altered the suspension, it was best suited for the drag strip,” says Shelby American President Gary Patterson. “The new Shelby 1000 is an entirely different car designed to be the ultimate road course warrior.”

Transforming a run-of-the-mill Ford Mustang GT into a Shelby 1000 starts with the replacement of the factory 5.0L V8 with a high-performance 5.2L Aluminator powerplant, boosted to 1,000 horsepower with a 4.5L Whipple supercharger. The engine features modified Shelby GT350 heads and strong, durable internals, while necessary supporting equipment like a high-flow fuel system, upgraded cooling system, air-to-air intercooler, and ECU with unique tuning are installed. Long tube headers and a Borla exhaust system give the 1,000-horsepower car a unique growl.

From there, it’s off to the body shop, where the Shelby 1000 Mustang is given a wider front and rear track width. Unique body components such as a hood, front fascia with grille, quarter panels, rear diffuser, and rocker panels are fitted, while the frame is reinforced and the suspension undergoes a complete transformation. Upgraded Shelby 1000 suspension components include:

“We do far more than just add horsepower and cosmetics to the Shelby 1000,” says Shelby American VP of Operations and Head of Development Vince LaViolette. “We replace every major component to create the ultimate track machine. The result is a car that will slice through corners and blast down straights with amazing ease.”

That all sounds quite palatable. What’s a tad harder to swallow is the estimated sticker price: $219,995, if you include the cost of a brand-new Ford Mustang GT. Transforming an already-titled Mustang into a Shelby 1000 is expected to cost $169,995. Moreover, Shelby American decided not to pursue emissions compliance this time around, meaning that the new, 2018 Shelby 1000 is for off-road use only.

Then again, the Shelby 1000 is and always will be an American automotive icon. Can you really put a price on that?