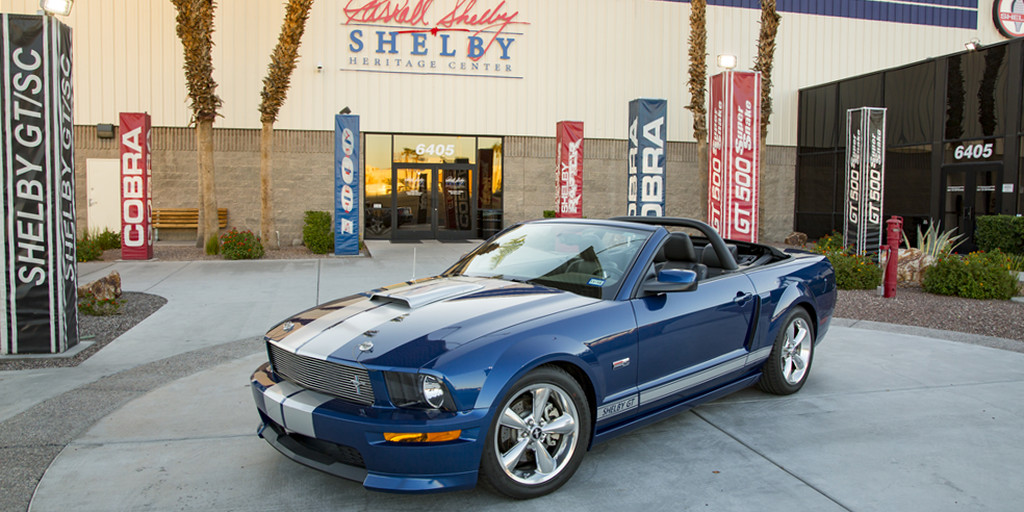 Visitors to the 2018 Barrett-Jackson Scottsdale auction event this month will have the chance to come away with a very special, high-performance Shelby Mustang prototype: a 2007 Ford Shelby GT, powered by a normally-aspirated, 4.6-liter Modular 3-valve V8 with a cold-air induction system and a software tune that netted around 320 horsepower – about 20 more than the regular Mustang GT of the day. This particular car bears the distinction of being the prototype for the first Mustang-based convertible Shelby Automobiles built in nearly four decades.

It also comes equipped with the same 5-speed manual that handled power in each and every production example of the car, and boasts a handsome charcoal gray interior under an exterior painted blue with silver stripes.

This Ford Shelby GT prototype is being auctioned to raise money for the Carroll Shelby Foundation, which provides support for children fighting with life-threatening illnesses and supports educational programs and scholarships in automotive and related fields. It’ll cross the auction block on January 19th, driven by Aaron Shelby – Co-president of the Carroll Shelby Foundation.

“The Carroll Shelby Foundation has been helping kids with the race for life since 1991,” Aaron Shelby says. “We’re selling the Shelby GT prototype driven by my grandfather to help raise money for the charity that he loved. Those funds will give financial support to children and the medical professionals who help them overcome life-threatening health issues. Some of the money will also promote continuing educational development through initiatives like the Carroll Shelby Automotive Technology Program.”

For more high-quality photographs of this special prototype Ford Shelby GT, check out the original listing on the Barrett-Jackson website.