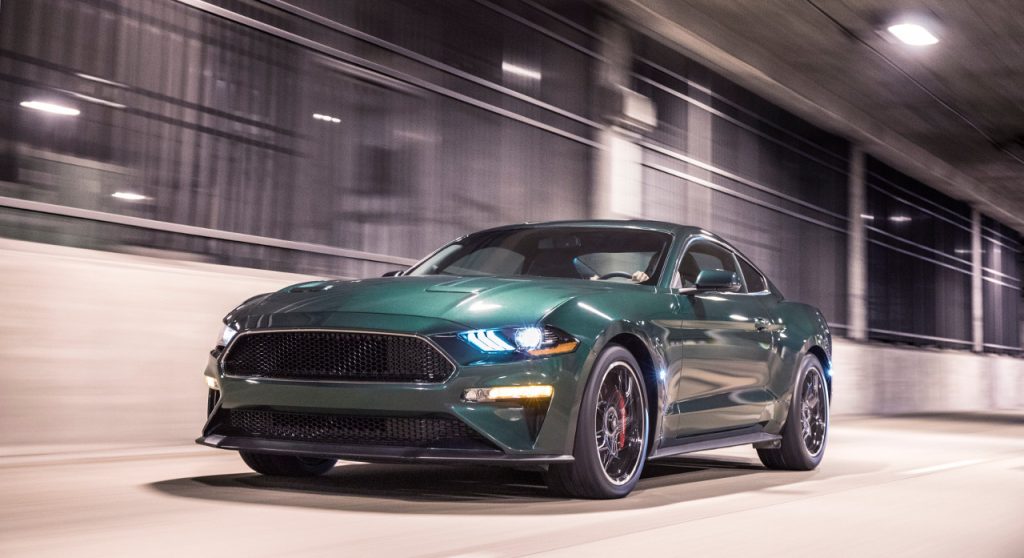 Correction: A previous version of this article said that Ford was offering the 2019 Bullitt Mustang in black “for the first time.” In fact, the previous iteration of the Bullitt was also available in black. The article has been corrected accordingly.

In case you missed it, on Sunday, Ford pulled the wraps off of an all-new Bullitt Mustang – the latest pony car to wear the iconic badge, meant to pay homage to the 1968 Steve McQueen film Bullitt. Like each previous iteration of the car, the 2019 Bullitt Mustang offers a modest bump in performance over the standard Mustang GT, unique styling cues, and Highland Green exterior paint – the same color as was worn by McQueen’s ’68 Mustang in the movie.

There’s plenty to love, but presented here in no particular order are our top five favorite features of the 2019 Bullitt Mustang.

If you don’t quite fancy a pony car in green, Ford is offering the brand-new Bullitt Mustang in black. This is, in our humble opinion, a mistake: not only is Highland Green a superb color to behold, but it’s a hue that’s intrinsic to the model, as it has been since Bullitt premiered five decades ago.

Ordering the 2019 Bullitt Mustang in Shadow Black would be sort of like buying a Back to the Future-edition Chrysler LeBaron. It’s just not the right car.

Has any wheel design ever really managed to surpass the classic Torq Thrust in terms of cool factor? It’s a classic look, especially with a black center and polished barrel as on the original 1968 Mustang movie car, as well as this new, 2019 Bullitt Mustang.

The Torq Thrust wheel is, in a sense, America’s answer to Porsche’s iconic five-spoke Fuchs wheel.

The cue-ball shift knob is another recognizable detail from the 1968 Bullitt movie car, and it gives the cabin a beautiful, vintage touch, even while the instrument cluster is entirely digital and the materials selection entirely modern. It just wouldn’t be a Bullitt Mustang without the cue-ball shifter.

For as long as Ford has been making special-edition Bullitt Mustang models, the faux gas cap with the crosshair Bullitt logo has been a distinguishing feature. It’s a cool, unique, and expected motif.

When Ford introduced the new Bullitt Mustang, it was accompanied by the quick video you see above, which gives us our first listen of the new car’s burble. The exhaust system, while essentially the same as the standard Mustang GT’s active valve performance system, is specially-tuned for the Bullitt to give it a unique sound. And so far as we can tell, it’s a mighty good one.