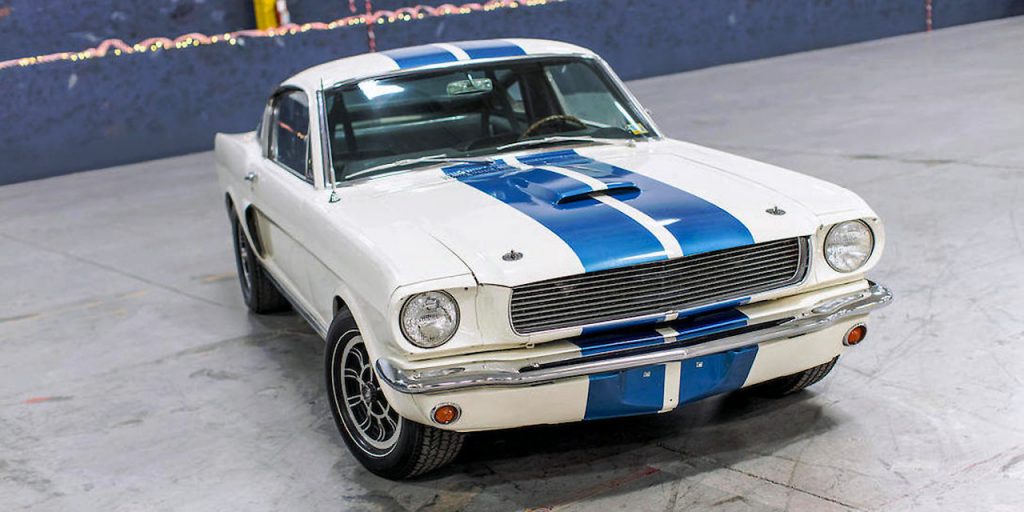 Good news for those who hold the late, great Carroll Shelby in high regard: later this month, you’ll have the opportunity to buy the performance guru’s own Shelby GT350-H Mustang at the Bonhams Scottsdale auction event in Scottsdale, Arizona. Offered without reserve, this 1966 Shelby GT350-H still wears its original color combo – Guardsman Blue LeMans stripes on a Wimbledon White body – and is mostly original.

This particular example was built with a 3-speed automatic transmission, and originally, it came from the factory fitted with optional chrome Magnum wheels, an optional radio, and the optional brake booster. Its color combination is notable for not being the same gold-on-black scheme that the Shelby GT350-H Hertz rental cars are rather known for. After its delivery to Hertz of San Diego, California, it was rented out as a “rent-a-racer” to members of Hertz’s Sports Car Club at the low, low rate of $17 a day plus $0.17 per mile for more than a year before being scooped up by its first private owner – one Mr. Fred Johnson – on September 7th, 1967.

After taking ownership, Mr. Johnson installed a number of unoriginal (but cool) parts such as a gauge pod from a ’65 example with tach and oil pressure, an apron from the R model, R-model wheels, new valve covers, a new radiator, a roll bar, and a Berry Plastiglas rear spoiler. Carroll Shelby was, apparently, quite taken with the car when he saw it, as he purchased it from Mr. Johnson and kept it in his care right up until it was put on display at Shelby Automobiles in Las Vegas in 2008. Most of Mr. Johnson’s modifications have been undone, with the exception of the wheels.

Carroll Shelby’s personal 1966 Shelby GT350-H Mustang will cross the auction block at Bonhams Scottsdale January 18th, where it’s expected to fetch between $150k and $200k. For more photos and info, check out the lot description at Bonhams.com.

Own A 2005 Ford GT Driven By Carroll Shelby: eBay Find