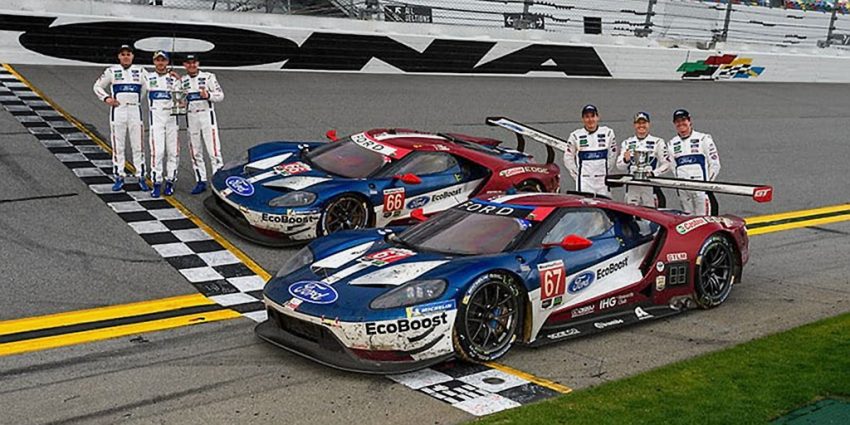 The No. 67 Ford GT race car driven by Richard Westbrook, Ryan Briscoe, and Scott Dixon won last weekend’s Rolex 24 at Daytona – the first race of the 2018 IMSA WeatherTech SportsCar season – in the GTLM class, while the No. 66 Ford GT of Dirk Mueller, Joey Hand, and Sebastien Bourdais followed close behind for a second-in-class finish. The win was a special, as it marks team owner Chip Ganassi’s 200th victory in major league auto racing, and the Ford GT’s second consecutive Rolex 24 at Daytona triumph.

One or the other Ford GT led for all but nine of the 783 laps completed by the GTLM race cars, with the No. 66 leading the charge for around 21 hours. However, the 66’s final driver change of the race – from Bourdais to Hand – took a bit longer than planned because of a missed gear change, handing the lead to the No. 67.

“You always want to be the guy or the car that wins on a two-car team,” said Joey Hand after the race. “But for the program, it just goes to show that we had two flawless cars. I’ve never seen two cars run nose-to-tail for a whole 24 hours like we did. That just goes to show what these Ford Chip Ganassi Racing guys are capable of.

“From the preparation to the leadership from Chip, he puts the right people in the right places and that’s really all there is to it. After it’s all said and done, all he asks is that we go out there and do our job. I did my best today. I drove a lot. We drove a lot of laps and it just wasn’t enough at the end.”

The Nos. 66 and 67 Ford GT race cars successfully held off a field of fierce GTLM competitors including two Corvette C7.Rs, which ran a clean race and finished third and fourth.

The 2018 IMSA WeatherTech SportsCar Championship will continue in March with the Mobil 1 12 Hours of Sebring, March 15th through the 17th.