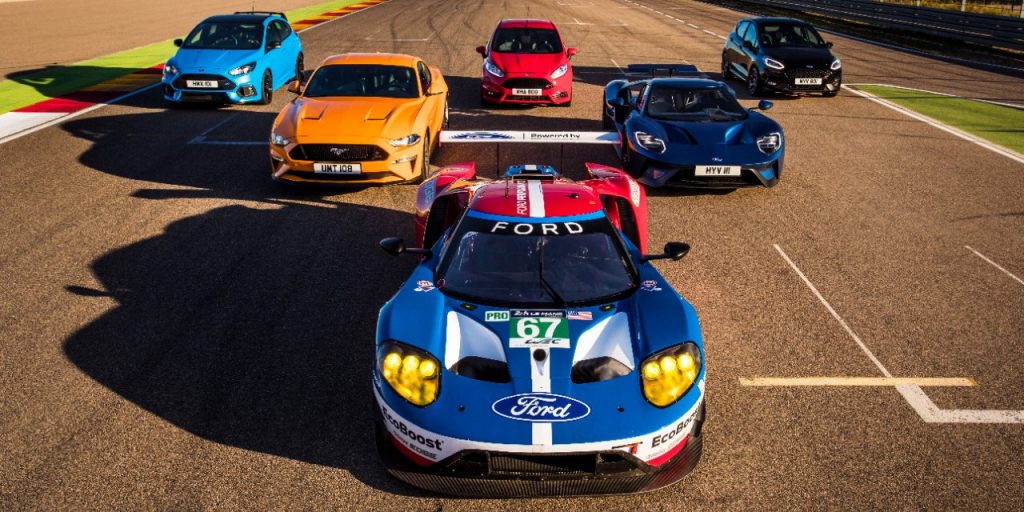 Ford’s performance division is reminding us that it’s put out a number of capable, exhilarating machines over the past few years with this video, in which its two most recent Fiesta ST models, a Focus RS, Mustang GT, Shelby GT350R Mustang, F-150 Raptor, Ford GT road car, and Ford GT race car all go head-to-head at the MotorLand Aragón near Barcelona, Spain. Seated at the wheels of these Ford Performance cars are racing drivers Andy Priaulx, Harry Tincknell, Olivier Pla, and Stefan Mücke from the FIA World Endurance Championship, and Dirk Müller, Joey Hand, Richard Westbrook, and Ryan Briscoe from the IMSA WeatherTech SportsCar Championship.

We can all likely guess which car came in first: the Ford GT race car, which just this past weekend won the 2018 Rolex 24 at Daytona, kicking off what promises to be an exciting IMSA WeatherTech SportsCar season.

The video did not include the Ford Focus ST, which reintroduced the North American market to the Ford of Europe way of building a proper hot hatch back in 2012, but hasn’t really changed much since. Also missing was the just-revealed Ford Edge ST – Ford Performance’s first crossover/SUV model. It’s a bit too early still for that to make an appearance, we reckon.

What’s notable is that of the eight different Ford Performance vehicles shown in the video, seven are cars, and four of those – both Fiesta STs, the Focus RS, and the Shelby GT350R – are available only with a manual transmission. The Mustang GT offers a stick-shift as an option. In a world that seems determined to shift the market away from cars and deliver the final blow to the disappearing manual gearbox, Ford Performance is doing its part to keep both alive.

Watch the video above to see how quickly each of these eight performance-oriented vehicles completed a lap of the MotorLand road course.

Lincoln Brand Finds Its Footing In China After Eight Years

Why Ford Performance Exists And How It Affects The Road Cars