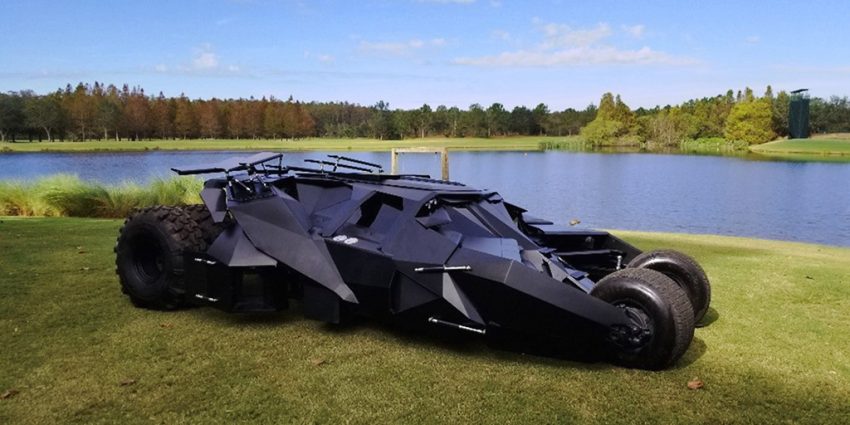 Listed for sale on Autotrader right now for a tidy $675,000 is what has to be the most unusual 1968 Ford Mustang we’ve ever laid eyes on.

In fact, we can’t work out whether any appreciable portion of it was even borrowed from a Mustang, even though it’s legally registered as one. It’s a replica of the Batmobile “Tumbler” seen in Christopher Nolan’s Dark Knight Trilogy of Batman films: Batman Begins (2005), The Dark Knight (2008), and The Dark Knight Rises (2012). It’s powered by a 350-cubic-inch Chevrolet small-block donated by a 1969 Corvette, and boasts a tubular frame, and “over 25 percent aero-grade carbon fiber body panels and accent pieces,” according to the listing.

It also features a custom dually rear end and a unique, hub-less front axle, just like on the film car. The DOT-approved headlights, brake lights, turn signals, and floodlights all use LEDs, as do the six strobe lights mounted on the outside of the car. Inside, a trio of screens are mounted to display three different camera feeds in real time, and unlike the other replicas out there, the roof can actually be opened.

Perhaps best of all, the car is fitted with a nifty pyrotechnic system that spews a variable-length flame at the push of a button.

Look, we won’t tell you how to spend your money, but we think it goes without saying that this “1968 Ford Mustang” Batmobile Tumbler replica is one terrific use of $675k. Whether you’ve got a date you want to impress, an itch to go out and do some vigilante justice, or a superhero-themed charity gig at the local children’s hospital, this Batmobile can provide.