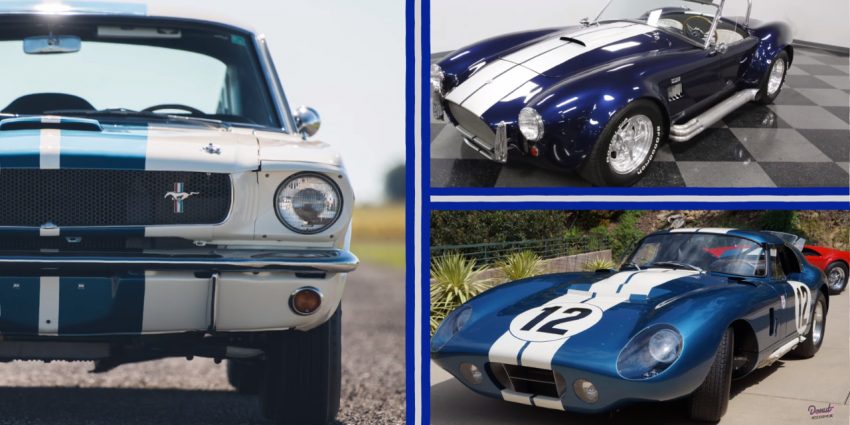 Today, racing stripes are virtually synonymous with speed. Ford offers the aesthetic feature on the Shelby GT350 Mustang and Ford GT supercar – its two quickest track performers – straight from the factory, and a handful of other automakers have also embraced the style, rolling racing stripes into the options lists for only their fastest, most sporty offerings.

But how did this come to be? How is it that the entire motoring community has come to accept the racing stripe as a universal symbol for speed and performance?

That’s the question that Donut Media attempts to answer in its most recent video, starting with the earliest racing-striped cars the staff can think of: the 1965 Shelby Cobra and ’65 Shelby Mustang GT350. Both cars were given their respective racing stripes after author, photojournalist, and automotive designer Peter Brock was promoted to Head of Special Projects at Shelby American, in recognition of his fruitful work designing the Daytona Coupe.

The correlation is undeniable: Brock ascends to Head of Special Projects, becoming responsible for the design of each and every car to come out of Shelby American. The very same year, the stripe-wearing GT350 comes out, while the Cobra – in production for roughly three years at this point –
is updated with racing stripes. Surely, then, Brock was the originator of the racing stripe?

As it turns out, he wasn’t. Brock was asked about it years ago, at which point he cited Briggs Cunningham – a wealthy automobile and yacht racer – as the originator of the racing stripe. In 1951, when Cunningham entered two of his own C-2R race cars at Le Mans, the rules stipulated that each competing car must wear the colors of its country of origin. While most other teams were painting their vehicle bodies one color and the frame another, Cunningham instead came up with the stripes as a way of incorporating royal blue over the C-2R’s white body.

It’s a fascinating story, and one which answers a question that we never thought to ask. For a more fun, detailed account of how the racing stripe was born, watch the latest video from Donut Media above.