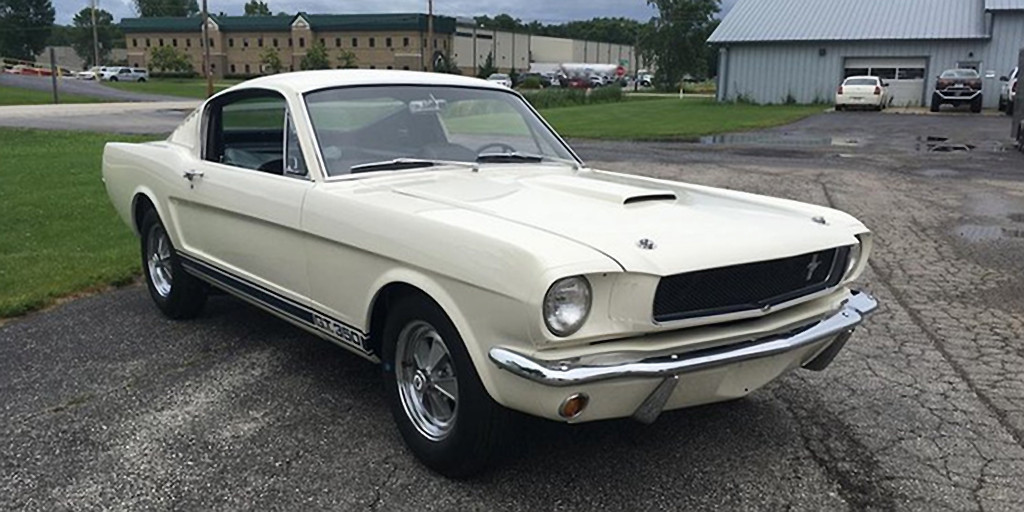 Should you happen to have $575,000 lying around, this pristine, Wimbledon White 1965 Shelby GT350 Mustang for sale in Wisconsin is calling your name. It’s been restored to the Shelby American Automobile Club and Mustang Club of America’s “highest judging standards with no expense spared to acquire and use assembly line parts,” according to the listing on MotorGT. Translation: just about everything you can think of that’s needed replacement has been replaced with original, factory-correct parts.

The entire restoration effort took three years, according to the listing, with the owner getting involved and helping track down the “near impossible to find restoration parts”.

All of this means that this 1965 Shelby GT350 is as close to original as you’re liable to find. The car has an original, 1964-dated K-code engine with the correct S1MS intake manifold and Holley Lemans carburetor, and an original S1MS oil pan, C5-marked harmonic balancer, Ford dual-point distributor, chrome air cleaner, K-code fan, and cast-aluminum Buddy Bar valve covers. The ceramic-coated exhaust is concours-correct with NOS mufflers and clamps.

The nearly-$600k price tag for this 1965 Shelby GT350 Mustang is steep, with Hagerty quoting an average value of $382k for a good-condition example, or $535k for a concours specimen. Still, the US isn’t exactly littered with early GT350s as pristine as this one, which might as well have been kept in a hermetically sealed chamber for the past 50 years. We suspect it might just fetch its entire asking price.

For more photos and info, check out the listing on MotorGT.com.