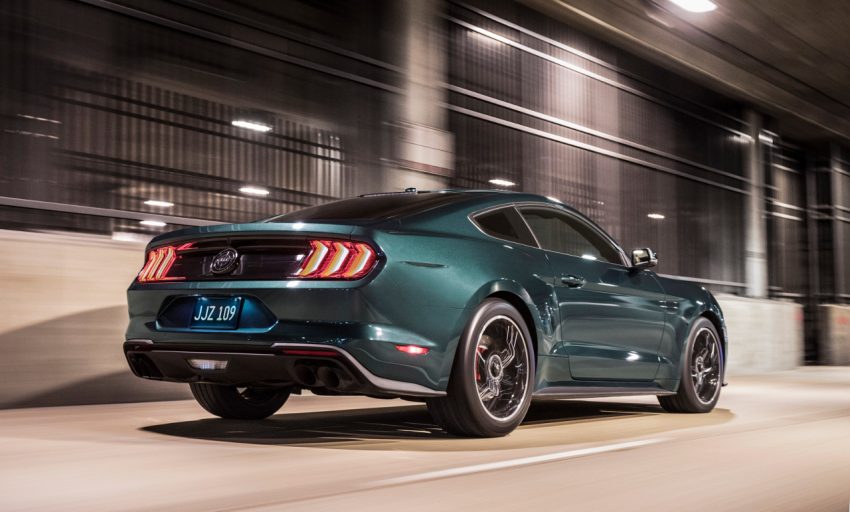 Sometime between now and when the 2019 Ford Mustang Bullitt Edition was officially unveiled at the 2018 North American International Auto Show in Detroit last January, the Blue Oval managed to find another five horsepower under the hood, with Ford today announcing an official power rating of 480 horsepower – not 475 – for the special-edition Bullitt Mustang. Equipped with the same new dual-injected Coyote V8 that’s employed by the 2018 Ford Mustang GT, the Bullitt Mustang draws its extra 20 horsepower from an open air induction system, the intake manifold off of the Shelby GT350, and enlarged, 87-mm throttle bodies.

Ford today also announced that pricing for the new Bullitt Mustang will start at $46,595, plus a $900 destination charge, making the new special-edition model just $7,405 more expensive than a 2018 Ford Mustang GT Premium Fastback. That’s not bad when you consider that the ‘Stang’s $3,995 Performance Pack and its 12-inch digital instrument panel – part of the $2,200 “Premium Plus” package on the GT – come standard.

It’s even easier to stomach when you remember what the 2019 Bullitt Mustang represents: a limited, collectible homage to one of the greatest chase scenes ever committed to film. In the 1968 film Bullitt, starring actor Steve McQueen drove a Highland Green 1968 Mustang GT in pursuit of a black ’68 Dodge Charger 440 Magnum up and down the hills of San Francisco, resulting in ten full minutes of intense, exhilarating action.

The 2019 Bullitt Mustang is the third limited-edition pony car in Ford’s history to pay homage to the 1968 Steve McQueen film and its iconic pursuit vehicle, the other two appearing in 2001, and from 2008-’09.

“The new Bullitt will be every bit as cool and charismatic as the original ’68 Mustang,” says Ford Car Group Marketing Manager Corey Holter. “Since its introduction earlier this year, Ford dealers have been fielding calls from customers wanting to know when they can order this unique piece of automotive history.”