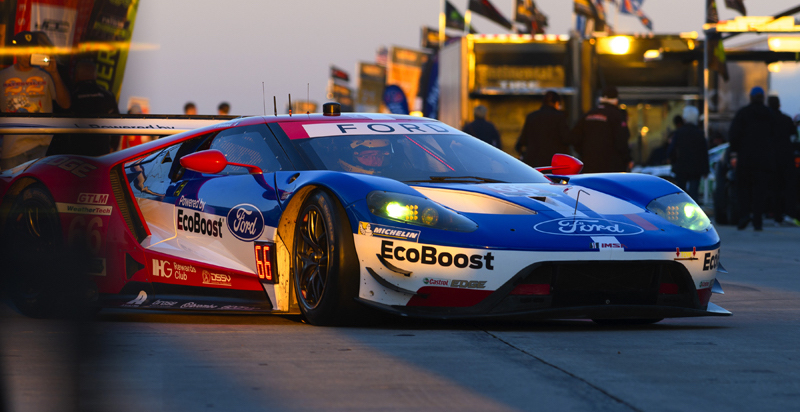 The Ford Chip Ganassi Racing team narrowly missed out on a place on the podium at last weekend’s Mobil 1 12 Hours of Sebring – the second round of the 2018 IMSA WeatherTech SportsCar Championship – with the No. 67 Ford GT of Richard Westbrook, Scott Dixon, and Ryan Briscoe finishing fourth out of nine entries in the GT Le Mans class. Germany swept the podium at the race, with the Porsche 911 RSR taking first and third by the end of the 12-hour endurance race, and the BMW M8 GTLM snatching second.

The results mark a great change from the first race of the season at Daytona, where the No. 67 Ford GT won the Rolex 24 handily, followed up closely by the No. 66 Ford GT in second.

At Sebring, the No. 67 and No. 66 Ford GT race cars started from fourth and fifth in class on the grid, respectively, and were running strong until an incident less than two hours in, in which they collided with one another leaving the pits. Despite that setback, both ran hard and worked their way up to second and third in the GT Le Mans class, running within 10 seconds of the lead car early on.

Ultimately, though, it wasn’t enough; the No. 67 Ford GT ceded all three podium positions to the German automakers. The No. 66 had even worse luck, suffering a significant crash about four-and-a-half hours into the race and sustaining heavy front- and rear-end damage that required mending in the pits.

The No. 66 Ford GT went on to place last in the GTLM class, just after the No. 3 Chevrolet Corvette C7.R.

Ford Chip Ganassi Racing will lick its wounds and try again to capture a podium finish or two at next month’s Bubba Burger Sports Car Grand Prix at Long Beach, on April 14th.