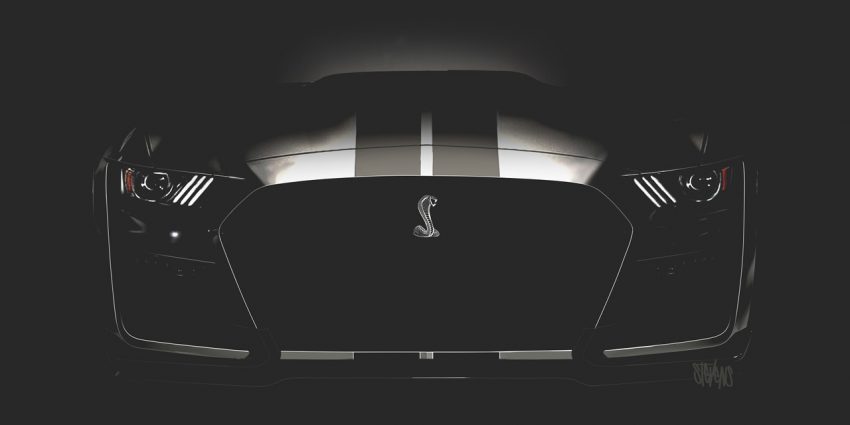 Lest we forget, at the same time that Ford is putting significant effort and capital toward expanding its lineup of hybrid and pure-electric vehicles around the globe, and spending an increasing amount of time talking about the virtues of active safety and self-driving tech, the automaker is still catering to die-hard gearheads and coming out with bonkers, high-powered, fuel-gulping performance machines like the forthcoming Shelby GT500 Mustang. An all-new GT500 was rumored for years, and finally confirmed at the 2018 Detroit Auto Show, with Ford revealing that the hot new Shelby would deliver more than 700 horsepower via supercharged V8 engine.

Now, Ford has shared its first teaser image of the forthcoming Shelby GT500 Mustang, looking mean as all get-out with a gaping grille not dissimilar from the one on the Galpin Fisker Rocket, a front chin spoiler, and a pair of thick Le Mans stripes tracing down the hood. Ford isn’t ready to show the model off in earnest just yet, but we’re anticipating a full reveal later this year, and a 2019 launch date (as a 2020 model).

In January, a photo released by Ford contained what may have been an Easter Egg pointing to a 772-horsepower rating for the all-new Shelby GT500. That number is far from confirmed, but if true, it would make the new Shelby 110 horsepower more powerful than its most recent predecessor – the 2013-’14 GT500 – and 122 horsepower stronger than the Chevrolet Camaro ZL1. It would fall just short of the Dodge Challenger SRT Demon’s 808-horsepower rating (on pump gas).

With words like “mobility” and “connectivity” now dominating much of the discussion about automobiles, leaving little space for silly, indulgent things like passion and performance, it’s good to see Ford going all-out for a blue-collar supercar all the same. Granted, there’s some money to be made there; Ford Performance sales could grow by another 71 percent by 2020, the automaker says.

But most of that, according to Ford, will be driven by SUVs like the all-new Edge ST and soon-to-be-revealed Explorer ST.

Stay tuned for more news on the forthcoming all-new Shelby GT500 Mustang as it breaks.

‘The Rock’ May Have Leaked A Forthcoming Ford Mustang ‘Bullitt’: Video