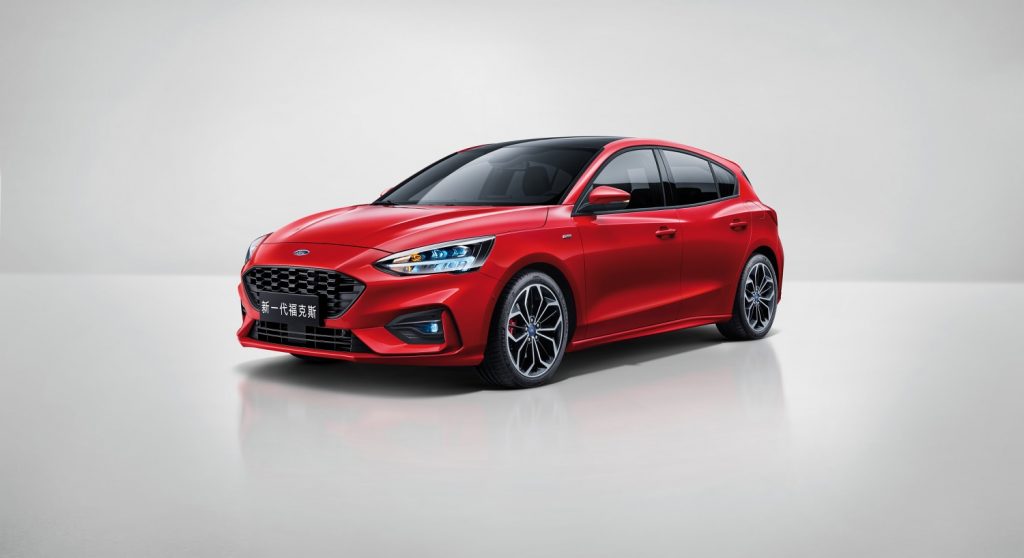 The 2019 Ford Focus, revealed today for the European and Asian markets, kicks off a brand-new, fourth generation for the Blue Oval’s popular compact car. While that’s good for Ford in Europe and America, where the Focus has gone a good seven years without a full redesign, it’s perhaps most vital for Ford’s business in China – a large and fast-growing market that’s seen relatively little recently in the way of new products from the automaker.

Ford knows this, and while the all-new Ford Focus is slated to launch later this year as a 2019 vehicle in the European and Asian markets, the compact car will wait about 12 months before coming to North America, with production taking place, incidentally, in China.

Ford staged a reveal event for the new Ford Focus in Chongqing, China, unveiling sedan and hatchback versions of the plush Focus Titanium and the sporty-looking ST-Line. A fifth vehicle was also present at the event: a refreshed version of the Chinese-market Ford Escort compact car, which is based on the old, second-generation Focus, selling at a lower price point than the current Focus.

China, like most every market around the globe, has become increasingly enamored with crossovers and SUVs as of late, but that doesn’t mean the segment in which the Ford Focus and Escort play isn’t an important one. “Compact sedans still account for 35 percent of overall passenger vehicle sales,” says Automotive Foresight Managing Director Yale Zhang. “A good mainstream sedan is still very important to a carmaker’s business in China.”

Zhang says that growth in the Chinese crossover/SUV segment has slowed to about 10 percent per year in recent months.

For Ford, every bit of market share counts. The automaker’s total new vehicle sales in China slid six percent in 2017, and the first few months of 2018 have been even more bleak, with sales tumbling by 18 percent in January and 30 percent in February, year-over-year. Still, the company is committed to striking success in the market, with plans to introduce 50 new or revised products there by 2025, and a target of 50-percent more revenue by then, compared to 2017. The brand-new Ford Focus and revamped Escort shown today are just the start.