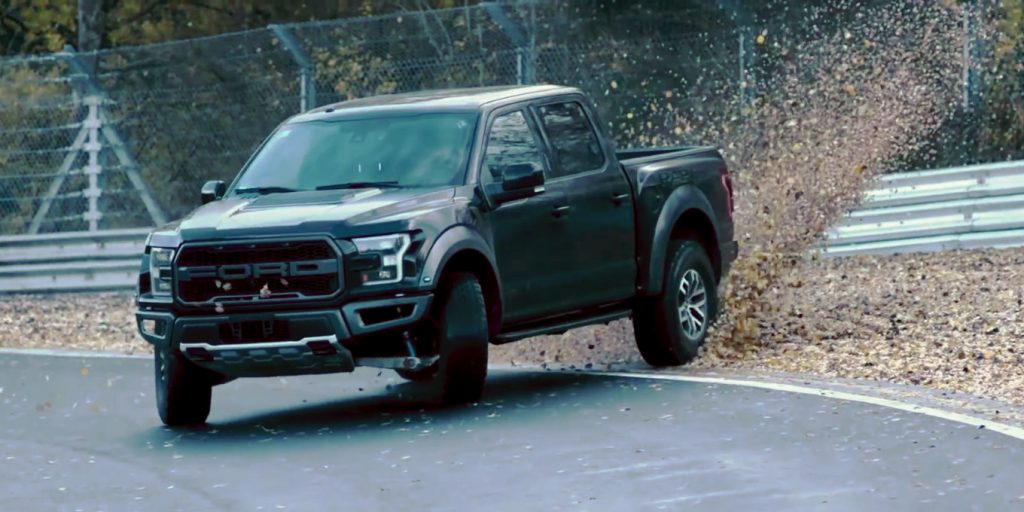 Initially, Vaughn Gittin Jr.‘s choice of vehicle for drifting around the Nürburgring Nordschleife made a bit more sense: the Ford Mustang RTR Spec 5-D. Gittin and Ford Performance announced late last week that the accomplished Formula Drift driver and entrepreneur would slide his way through the Nürburgring’s 73 corners in the souped-up Mustang, becoming the first to do so. Fast-forward a few days, and Vaughn Gittin Jr. and friends arrive to dreary, drizzling rain in the cozy German town of Nürburg. “Drifting in the rain is boring,” Gittin says.

So, he grabs the keys to the nearest Ford F-150 Raptor, to “go do a hot lap, the fun way.” The video above is the result.

While this isn’t quite the sort of driving that we’re used to seeing at the Nürburgring Nordschleife, which regularly serves as a test track for global automakers’ most capable performance-oriented vehicles, we appreciate the hoonery nonetheless. Vaughn Gittin Jr. is a huge name in the Formula Drift series right now, where he drives the Ford Mustang RTR Spec 5-D for his own Ford-backed RTR Motorsports team, alongside Chelsea DeNofa.

Needless to say, that car, which is powered by a 1,000-horsepower Roush Yates racing engine borrowed from Ford’s NASCAR program, is not street legal. But fans who want a souped-up Formula D-style Mustang for the road can buy one of RTR’s more accessible Mustang models. Available in both Spec 1 and Spec 2 guises, using either the V8-powered Mustang GT or the four-cylinder Mustang EcoBoost as a base, the Ford Mustang RTR starts at $7,500 above the purchase price of the donor car.