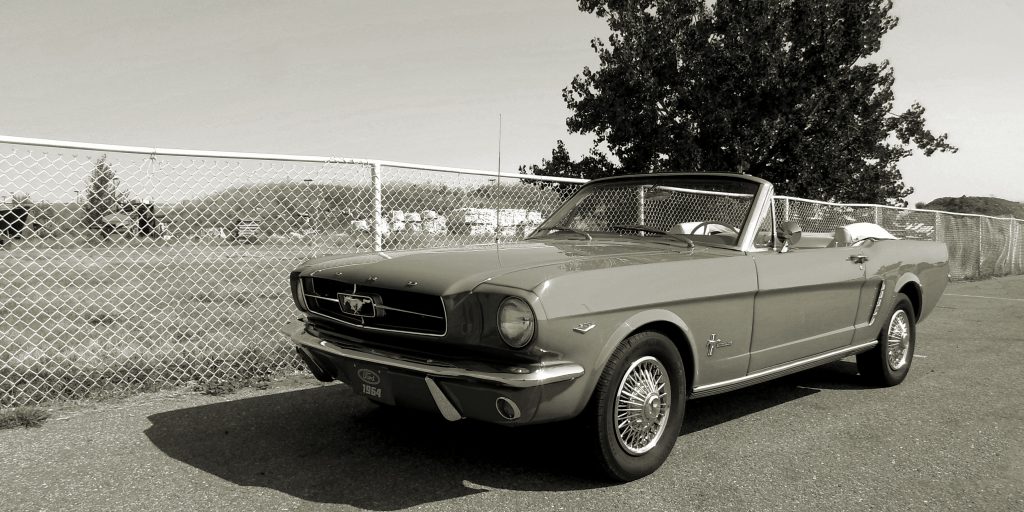 On April 17th, 1964, at the New York World’s Fair, Ford Motor Company revealed one of the most consequential and iconic cars ever to come out of America’s Big Three automakers: the Ford Mustang. Based on the underpinnings of the Ford Falcon family sedan, the Mustang was an attainable, sporty coupe with traditionally European sensibilities, aimed at capitalizing on the large number of young American buyers who suddenly found themselves with some disposable income. These buyers, who didn’t tend to carry the responsibilities that came with having a large family, were more interested in youthful-looking sportscars than ho-hum family sedans.

When introduced, the Ford Mustang was an immediate success that would come to define the “pony car” class of automobile – even though the like-minded Plymouth Barracuda preceded it by a couple of weeks. It’s since undergone five complete redesigns, but the basic formula has always remained the same: two doors; a sleek profile with a long hood and short decklid; and available V8 power, all at a price that makes it affordable for the masses.

Now, after 54 years of continuous production, the Ford Mustang remains the iconic American pony car, routinely outselling the Chevrolet Camaro and Dodge Challenger, while other competitors – the Chevrolet Corvair, the Plymouth Barracuda, and of course, the AMC Javelin – have disappeared entirely. Since it started selling globally in 2015 with the launch of the sixth-generation (S550), the Ford Mustang has even become the best-selling sports coupe in the world, according to Ford – a distinction it enjoyed for a third straight year in 2017.

From the start of 2015 through the end of last year, Ford sold roughly 418,000 examples of the Ford Mustang around the globe.

No one really knows what’s next for the Mustang. The car’s latest redesign brought with it an independent rear suspension design for the first time in the car’s history, as well as the return of a turbocharged four-cylinder engine. We’ve got our fingers crossed that Ford’s next innovation for the long-lived pony car will come in the form of a lighter curb weight, whether through the use of an aluminum body like the F-150 has, the strategic use of high-strength steel throughout the unibody structure, or some other means.

However the Ford Mustang is set to change over the next 54 years, we can’t wait to find out.