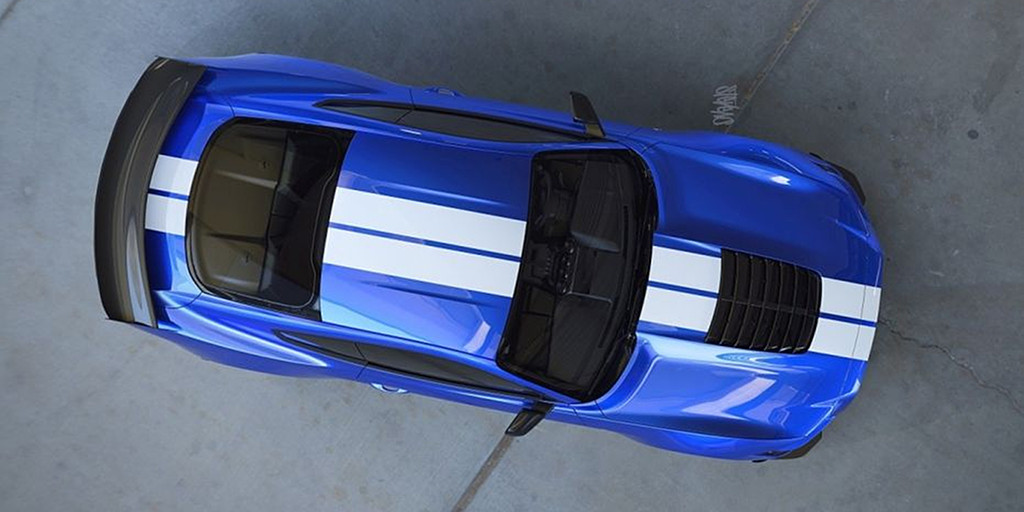 Ford’s forthcoming new-generation Shelby GT500 Mustang is starting to take shape, and Motor Trend was granted exclusive early access to a top-view image of the future high-powered pony car. The scintillating picture made the cover of that publication’s July “Future Cars” issue, and it provides a telling look at Ford’s next Shelby-badged performance product.

For one thing, while the bulk of spied Shelby GT500 prototypes have been photographed without a spoiler on the boot, Ford’s image clearly depicts an example with a healthy, broad aerodynamic affixed to the rear. At the front, we get to see just how sculpted the hood is, with a mammoth bulge running down the center to accommodate the GT500’s massive supercharger. The engine that will power the 2020 Shelby GT500 Mustang is thought to be a 5.2-liter version of Ford’s DOHC Coyote V8, boosted past 700 horsepower with a twin-screw blower.

The fenders of this Shelby GT500 look a bit wider than on the standard Ford Mustang GT, although perhaps no wider than those on the GT350 that launched back in 2015. That car, too, had a 5.2-liter V8 engine, albeit a unique one with a high-revving flat-plane-crankshaft design. The V8 powering this new, higher-performance Shelby street car is expected to contain a more conventional cross-plane crank. Power will transfer to the rear wheels through a six-speed manual by default, with an optional automatic rumored to join the fray: either the ten-speed automatic from the F-150 and Mustang model lines, or a new dual-clutch unit that could be developed from the Ford GT‘s seven-speed transaxle.

This image is, of course, not the first time Ford has teased the forthcoming Shelby GT500. The automaker released a teaser video to accompany its January, 2018 announcement of the pony car’s rebirth, and a couple of months later, put out an obscure, shadowy photo of the front end of the car.