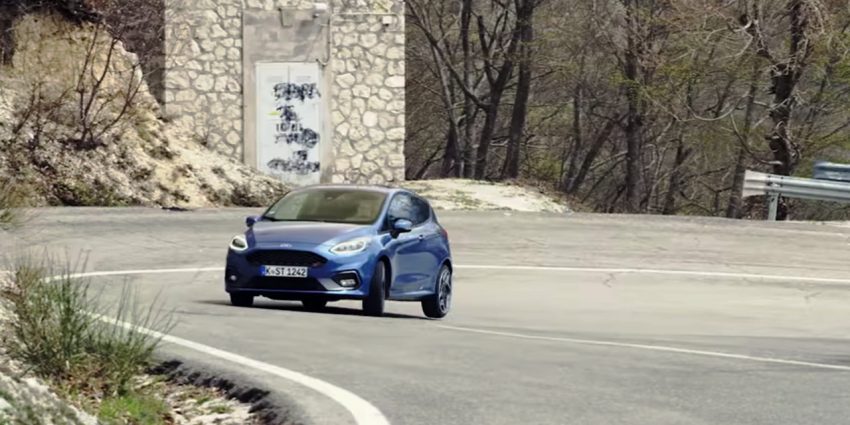 We all want what we can’t have, and here in the US, that conjures the all-new, 2018 Ford Fiesta ST. Due to slowing sales in the traditional car segments, Ford is pulling the plug on the Fiesta lineup in North America – along with the Fusion, the Taurus, and every model in the Focus range but for the crossover-inspired Focus Active. The “ST” badge, it seems, might be kept alive in the market only by performance-oriented crossovers like the Edge and the Explorer.

That’s a pity, because while modern advances have enabled such large vehicles to handle decently well despite their mass and size, lighter and smaller is generally better for carving corners. That’s what journalist Steve Sutcliffe proved in the latest video from Ford’s “Europe’s Greatest Driving Roads” series, in which he takes the 2018 Ford Fiesta ST on the Campocatino in Italy – a curvy mountain road 80 km east of Rome that’s pretty well deserted during the warmer months, when skiers have no reason to drive it.

The all-new, 2018 Ford Fiesta ST is down a cylinder and about 100 cc of displacement compared to its predecessor, yet it offers roughly the same power: about 200 horses of it. The zero-to-sixty time has shrunk from a respectable 6.9 seconds to a blistering 6.5, and a limited-slip differential is available from the factory.

That’s all fine and well, assuming you live in a market where you’ll be able to buy the plucky little hot hatch. Here in the states, we’ll just have to stew in our envy.

Dallara Stradale Is An Italian Supercar With A Ford 2.3L EcoBoost For A Heart