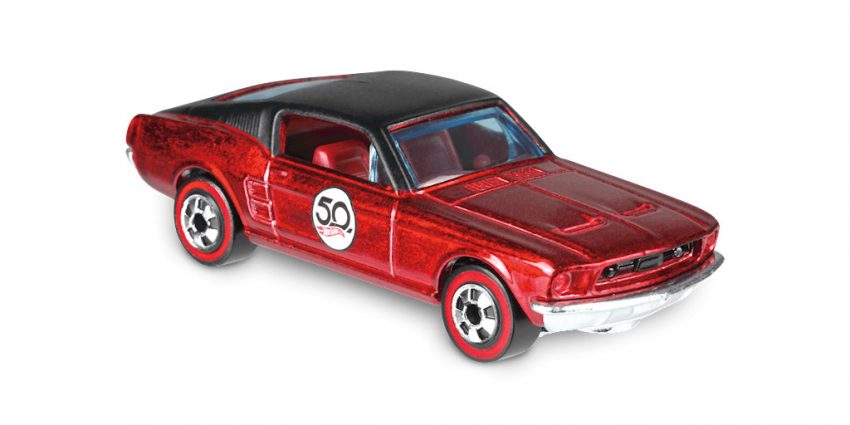 Mattel’s Hot Wheels brand of cast toy car models is about to celebrate its 50th anniversary, and to mark the occasion, the company is getting set to re-introduce five of its most beloved original designs for a limited time. Among them: a custom ’67 Ford Mustang in Candy Apple Red, and a ’68 Mercury Cougar in Gold. They and three other original Hot Wheels models (’67 Camaro, ’67 ‘Cuda, VW Beetle) will be offered in original-looking packaging, with special 50th anniversary door graphics.

All five of Hot Wheels’ special 50th anniversary models feature die-cast metal construction, “Spectraflame” candy metallic paint, redline tires, and special, collectible buttons, just like the first run of 16 original toys that rolled off the assembly line in 1968. Seeing as each of the five is a special, high-quality, limited-edition toy car, each will carry a higher price than Hot Wheels’ standard fare: $5.49 US. They’re slated to hit the shelves on May 18th. Over the last half-century, Hot Wheels has sold something like six billion toy cars around the globe, which is nearly enough for each man, woman, and child on earth to have one. Chances are pretty strong that if you’re a car fan in North America today, the brand’s scale models were a cherished part of your childhood.

Here’s to the next fifty years.