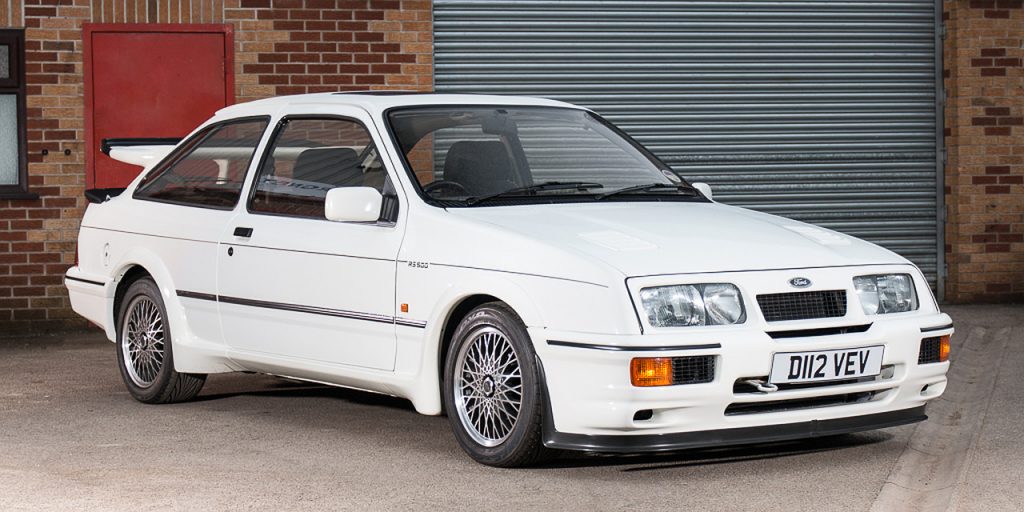 Crossing the auction block on May 19th at Silverstone’s “May Sale” in Northamptonshire, England is one very special piece of fast-Ford history: the very-first Ford Sierra RS500 Cosworth ever built. Apart from the fact it’s the only example to wear Chassis No. 1, what makes this RS500 utterly unique is that it’s the only one to have been built by Ford, the rest of the 500-unit production run having been turned out by Aston Martin Tickford. It’s expected to fetch between £90k and £120k – or about $122k and $163k USD at the current exchange rate.

An evolution of the 204-horsepower Sierra RS Cosworth, the 1987 Ford Sierra RS500 Cosworth was given a thicker-walled cylinder block engineered to hold up to racetrack abuse, a larger Garrett T04 turbo, larger intercooler, reworked induction system, upgraded oil and cooling systems, and more. All of this resulted in a peak output rating of 224 horsepower, while a lower rear spoiler, beneath the Sierra Cosworth’s characteristic “whale tail”, provided additional downforce. The front bumper and spoiler were also redesigned to increase cooling air flow, the fog lamps being replaced by grilles that supplied cold air to the brakes.

The Ford Sierra RS500 Cosworth is one of those great, rare almost-race cars from the past that perhaps never should have ended up in customers’ hands. It’s a true homologation special like the Ford Escort RS Cosworth and Ford RS200, built to satisfy the FIA’s “Group A” Touring Car Racing requirements by selling in numbers of at least 500. Just how much of an homologation special was it? The car features a secondary fuel rail with a second set of fuel injectors that simply aren’t used on road-going examples (but which helped the racing version exceed 400 horsepower). They just sit there, installed but not functioning.

For more photos and info regarding the utterly unique Ford Sierra RS500 Cosworth Chassis No. 1, click here for the Silverstone lot description.