Ford hasn’t given the 2019 Shelby GT350 a power bump, but instead applied its engineering expertise to hone the pony car’s track prowess in suspension, tire, and aerodynamic updates.

On Monday, Ford revealed the 2019 Shelby GT350, which benefits from the tuning knowledge of Billy Johnson, driver of the FIA World Endurance Ford GT and IMSA Mustang GT4. With his input, Ford made extensive changes to the standard MagneRide active suspension to complement changes to the cars aero and tires.

About the tires: Ford worked with Michelin to develop a brand new set of rubber with a Shelby GT350-specific tread pattern and different compound for increased grip and improved acceleration and braking. The 295/35 front and 305/35 rear tires wrap around new 19-inch aluminum wheels.

It’s a rewarding car to drive ontrack for amateurs and pros alike, while making the driver feel like a superhero. It’s confidence inspiring in corners and begs to be pushed harder and to take corners faster,” Johnson said of the 2019 GT350.

Moving around back to the GT350, onlookers will spot a new rear-wing design complete with an optional Gurney flap. Ford didn’t provide specifics, but the automaker said drivers should expect greater aero efficiencies with the Gurney flap and new grille closeout. The Gurney flap, however, will be available after the car’s launch.

As mentioned, power remains identical to the 2018 model-year car at 526 horsepower and 429 pound-feet of torque from a flat-plane 5.2-liter naturally aspirated V8 engine.

Aside from the mechanical changes and updates, Ford also gave the cabin a once-over. A new standard machined-aluminum instrument panel sits front and center, but buyers will also have the option of a carbon-fiber version. The door inserts not also feature dark slate suede with accent stitching, while Recaro seats remain standard, but gain a power-adjustable option.

Look for the 2019 Shelby GT350 to reach dealers in early 2019 as production kicks off at in Flat Rock, Michigan, around the same time. 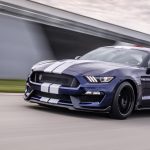 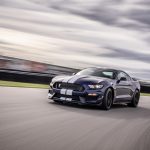 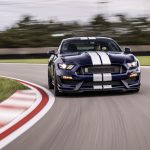 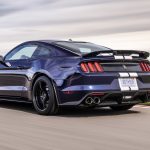 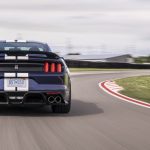 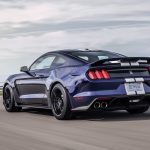 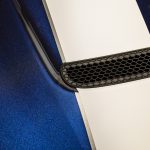 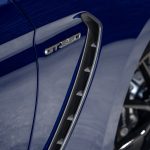 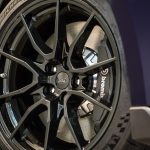 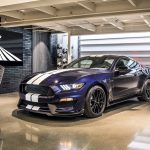