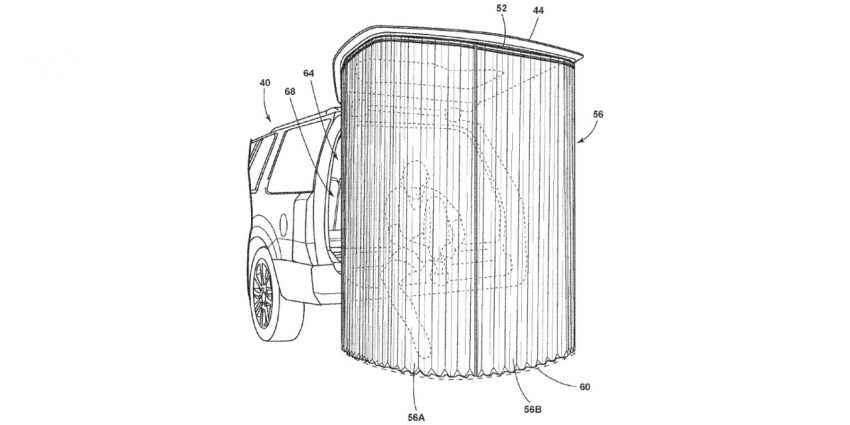 Depending on your age, able-bodiedness, and exactly what you’re trying to put on, getting changed outdoors – like, say, while camping – can be a chore. Typically, unless there’s a permanent structure like a restroom nearby, your choices are A) change in the car, B) change in the tent, or C) change in the wide open. All three are awkward and uncomfortable, and at least one of them could even get you arrested.

But what if there were a smarter way? Enter Ford Motor Company, which has filed for a patent for a curtain that stows within an SUV’s (or wagon/hatchback’s) lift gate. AllFordMustangs stumbled upon the patent, filed with the United States Patent and Trademark Office in late-2016, and reported that the curtain described by Ford might also have a “photoluminescent structure,” allowing them to be illuminated for use even in the dark of night. The patent also describes provisions for suspending the curtain horizontally, stretching from the back of the lift gate, to be used as an awning for tailgating.

Whether or not Ford’s lift gate-stowed luminescent curtain will ever reach production is anyone’s guess, but we wouldn’t be surprised to see the innovation make it to market. Ford is doubling down on its efforts in the offroad-vehicle space, meaning some portion of Ford’s future utility vehicles will have plenty of cachet with outdoorsy-types shopping for a vehicle that serves their lifestyle.

The lift gate curtain certainly makes a lot of sense in that context. Going camping soon? You might consider fashioning your own.