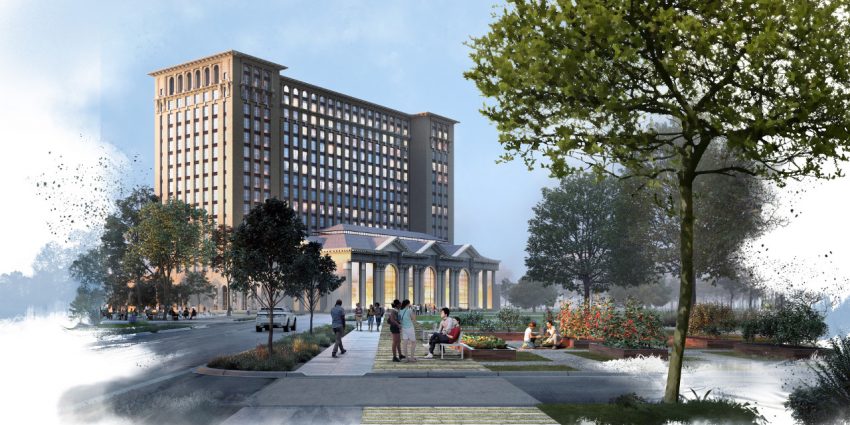 Ford Motor Company welcomed thousands of members of both the press and public to its newest Detroit property – Michigan Central Station in Corktown – on Tuesday morning for a celebration of its future in the Motor City, and to clue us in on what the company intends to do with the long-defunct former train station. Ford confirmed last week that it had acquired the property from the prominent Moroun family’s Crown Enterprises, after several rounds of discussions that began last October.

Detroit Mayor Mike Duggan says it was on Christmas Eve last year that Matt Moroun called to inform him that he intended to sell the former Amtrak station to Ford Motor Company. From then on, members of Duggan’s team worked alongside both parties in order to make a deal happen.

Ford didn’t share many specifics with the thousands of people gathered at Michigan Central Station on Tuesday, choosing instead to focus on the positive impact its new renovation project will have on the surrounding community. However, Ford did divulge that the train station would become a mixed-use space, with local restaurants and other vendors on the main floor, and dedicated workspace in the tower above, where employees will work on autonomous-, electric-, and connected-vehicle solutions. “We want this to be a public gathering spot,” said Executive Chairman Bill Ford.

Some of Ford’s partners – presumably, entities like Chariot (shuttle service) and GoBike (bike-share), as well as suppliers – will also occupy space on Ford’s Corktown campus, and Bill Ford says it is there that the automaker will “create the future” as it continues to focus on overcoming barriers to personal mobility. The Executive Chairman briefly mentioned Ford’s “newly-designed” Dearborn product campus, as well, suggesting that all or part of its renovation plans in that area are still on.

It remains to be seen whether the same is true of Ford’s World Headquarters campus, which was slated to be renovated shortly after the product campus received its makeover.

Michigan Central Station will be the keystone property in a campus spread out across Detroit’s Corktown neighborhood, which also includes The Factory at Corktown just down the street. In total, the campus will encompass some 1.2-million square feet and house 5,000 employees, half of whom will be direct Ford employees, with the other half coming from partners and other businesses. About a quarter of the total space will serve as community space, retail space, and housing.

“It’s where the future will be built,” Bill Ford told The Detroit News in an interview. “We’re going to have a corridor of mobility. The train station will be a spectacular building. It will be open to the public. One thing I don’t want is to have a big corporate presence, to be seen as a corporate takeover of Corktown.”