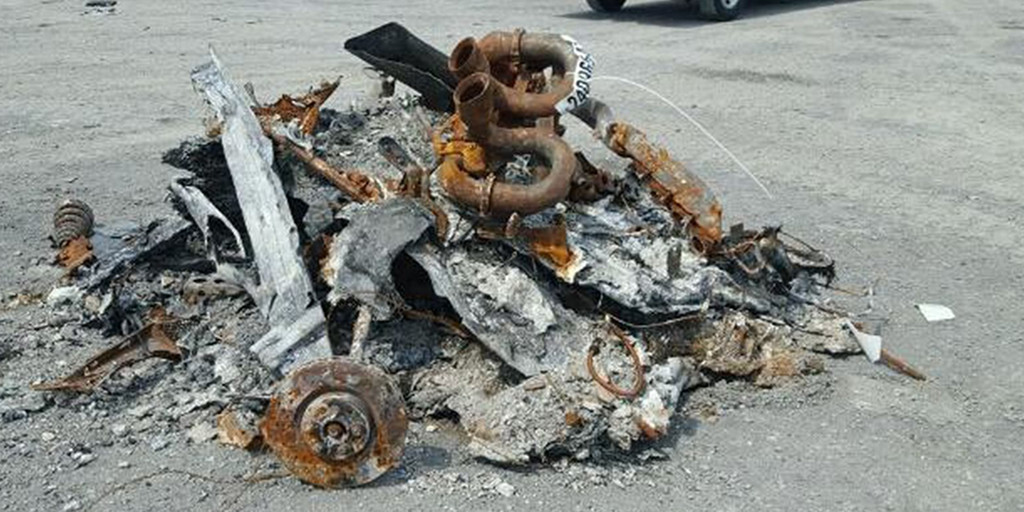 The original Ford GT supercar – the one built from 2004 to 2006 as an homage to the legendary GT40, and a celebration of the automaker’s 100th anniversary – has become a hot commodity with the release of the all-new second-generation version. The car, which originally retailed for $150k, can today fetch two to three times that depending on the condition, mileage, and submodel.

That said, there’s a dirt-cheap 2005 example that was posted for online auction recently that precisely no one bid on – likely because the car is, quite literally, dirt. (Ash, actually.)

The listing appears to have been taken down, but until recently, car sale website Copart.com carried a post for what the seller says was a 2005 Ford GT once upon a time. We don’t know that to be the case, as tragically, the mid-engine supercar appears to have caught fire and burned to the ground. All that remains is a pile of ash with the odd recognizable part sticking out here and there: a set of gears from the GT’s six-speed Ricardo transaxle, a badly oxidized brake disk, some crusty bits of exhaust plumbing, and not much else.

Before its untimely demise, this 2005 Ford GT was a sleek, low-slung domestic supercar with 550 horsepower on tap from a supercharged, 5.4-liter Modular V8. Now, it’s a cautionary tale about the dangers of smoking a cigarette while refueling, or of not replacing your fuel hoses and any associated clamps when they’re starting to let go, or whatever other fire-related disaster scenario you can think of.

It’s rather too bad the listing has been removed, though; this writer’s dad probably wouldn’t say no to a 2005 Ford GT for Father’s Day, and this example was right in my price range.