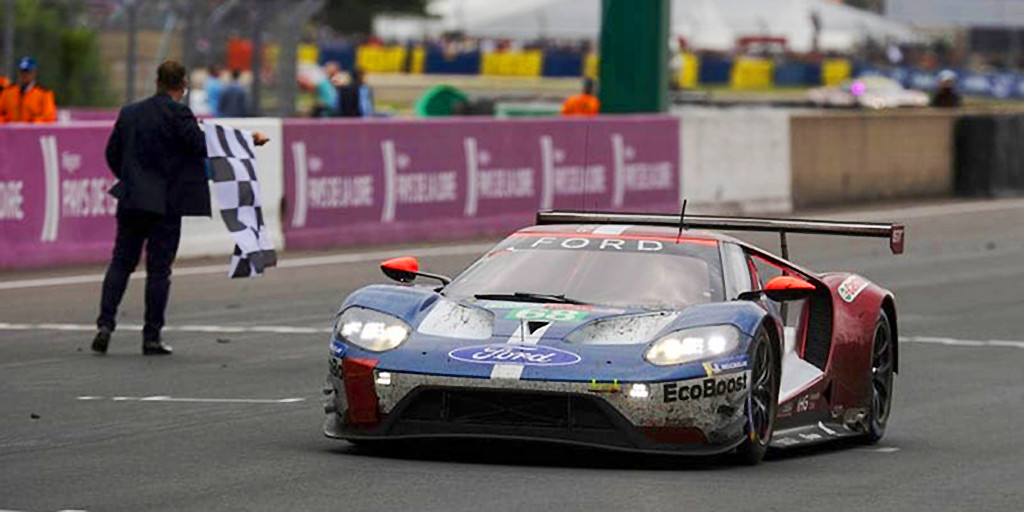 The No. 68 Ford GT race car netted Ford its fourth Le Mans podium finish in three years, claiming the final spot on a podium otherwise occupied by Porsche with a third-place finish in the GTE-Pro class. The car, which was driven by the trio of Joey Hand, Dirk Müller, and Sébastien Bourdais, was the second-fastest Ford in qualifying, and the fifth-fastest GTE-Pro car overall.

The podium result adds to the first- and third-place finishers Ford produced at the 2016 24 Hours of Le Mans, and the second-place finish the Blue Oval achieved last year.

Following close behind in fourth was the No. 67 Ford GT of Harry Tincknell, Andy Priaulx, and Tony Kanaan. Unfortunately, that car incurred an eleven-lap penalty after the race as Kanaan didn’t spend the mandatory minimum of six hours at the wheel, pushing the car back to twelfth-place in GTE Pro. The No. 66 Ford GT, which crossed the line in seventh, was bumped up to sixth as a result of the post-race penalty. That car faced an uphill battle after an on-track incident forced it off-road, resulting in a lengthy stay in the pits. It started the race from third, after proving the quickest of the Ford Le Mans entries in qualifying.

But the No. 69 car had the toughest time of all the Blue Oval cars at Le Mans, encountering gearbox issues while running toward the front of the pack in sixth. After some hasty repairs that took the better part of two hours, it was back out to finish the event, ultimately ending the race in fourteenth in the GTE-Pro class. Like the No. 67 car, it, too, was penalized for having a driver who didn’t spend the mandatory six hours at the wheel (Scott Dixon). After a two-lap penalty, its race result is unchanged.

“You want to win every race you compete in, but to come here, the world’s hardest sports car race, and see the effort that Ford Chip Ganassi Racing put in was great,” says Ford Performance Motorsports Global Director Mark Rushbrook. “They fought hard all day, finished third on the podium for the third straight year and for the third straight year all our cars finished.

“It’s unfortunate that most of the GTE Pro field got caught out by that early safety car because it changed the dynamic of the race. But we have to be proud of what this team did.”