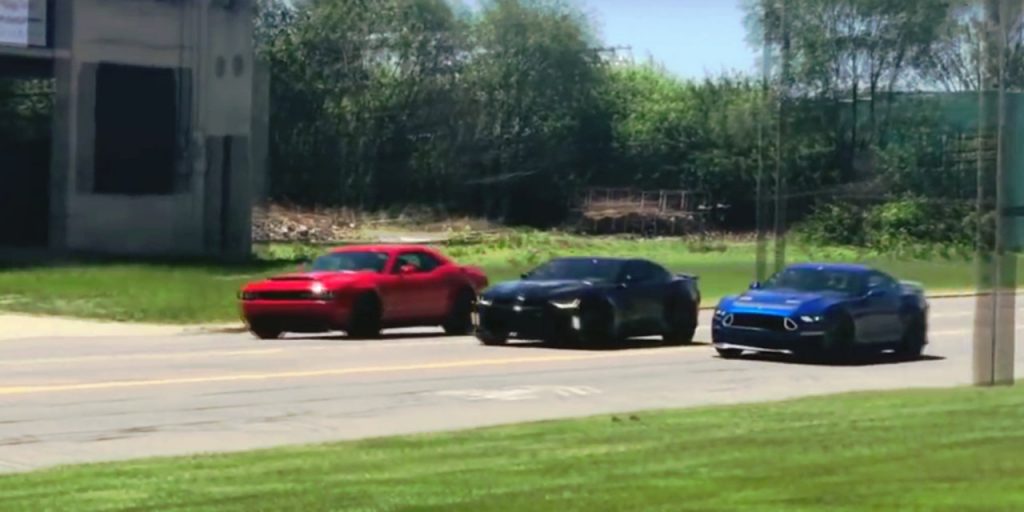 The three hosts of Amazon Prime’s The Grand Tour – Jeremy Clarkson, Richard Hammond, and James May – were spotted around Detroit, Michigan this week shooting with a trio of high-horsepower American pony cars. James May was tasked with driving the 1,000-horsepower Hennessey Performance Exorcist Camaro ZL1, Richard Hammond with the 808-horsepower Dodge Challenger SRT Demon, and Jeremy Clarkson with a Ford Mustang RTR.

Given the bonkers performance of the other two cars, we think it’s a safe bet the Mustang RTR Clarkson was seen driving had more going on under the bonnet than the RTR Spec 1 and Spec 2 models with their untouched power ratings. The 2018 Ford Mustang RTR Spec 3 is said to make more than 700 horsepower using a supercharged Coyote V8, though how much more is unknown.

It’s not very often that the British car show hosts Clarkson, Hammond, and May play around with American-market automobiles, but this time around, they’ve certainly selected the right town in which to do it. Detroit is at the very center of the American automotive industry and serves as the hometown of General Motors, while Ford is headquartered in the adjacent city of Dearborn, and Chrysler just up the road in Auburn Hills.

Eager to see how well the 2018 Ford Mustang RTR can hold its own against the Dodge Challenger SRT Demon and Hennessey Exorcist Camaro ZL1? Doubtless we’ll find out soon enough on a future episode of The Grand Tour.