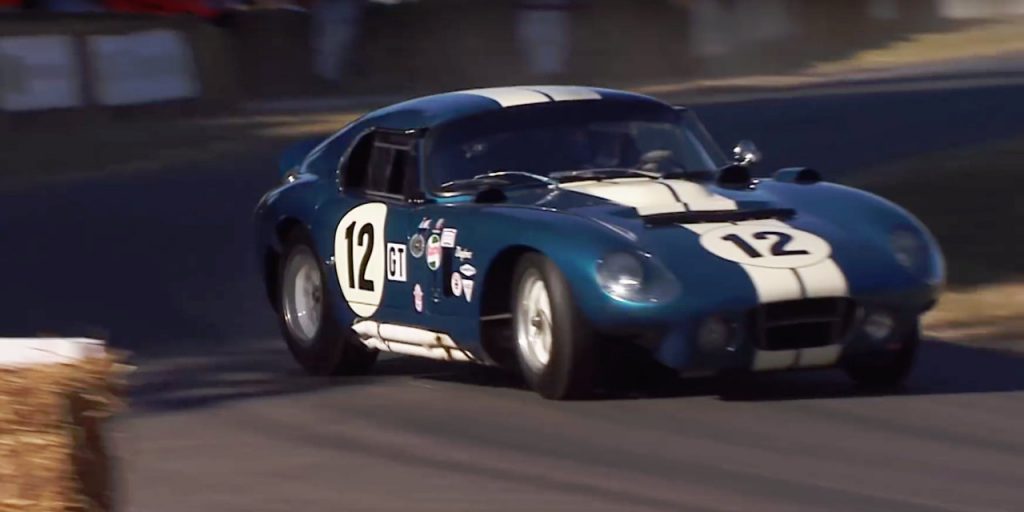 Performance driving is fraught with risks to life, limb, and property, so it’s always a treat when the owner of a rare, multi-million-dollar car throws caution to the wind and allows his or her irreplaceable motoring artifact to be driven at the limit for a crowd of awed fans.

That includes the 1964 Shelby Daytona Coupe in the video above, which participated in the hillclimb at this year’s Goodwood Festival of Speed. One of just six original Shelby Daytona Coupes ever produced, the car has an approximate value of £25 millon – about $33 million US at the current exchange rate.

In the 1960s, the Shelby Daytona Coupe was developed to address one particular issue: the poor aerodynamics of the Shelby/AC Cobra roadster. While generally competitive, the Cobra had a much lower top speed than the Ferrari sportscars it competed against in the World Sportscar Championship due to its open-top design. This was especially a problem at the 24 Hours of Le Mans, where the 3-mile-long Mulsanne Straight gave Ferrari’s 250 GTO a tremendous edge on the drag-limited Cobra.

Pete Brock was responsible for designing the sleeker, more aerodynamic body work of the Shelby Daytona Coupe, while Bob Negstad was responsible for the suspension. The car featured a front-mid-engine, rear-wheel-drive layout, with a 289-cubic-inch Ford V8 powering the rear wheels. The end result was a car that could reportedly exceed 190 miles an hour given a long enough runway, and which won the World Sportscar Championship title in the GT III class in 1965, after finishing second by a scant, 6-point margin the season prior.

Despite its historical significance and monumental price tag, the driver of the example featured at this year’s Goodwood Festival of Speed certainly didn’t seem to hold much back as he tackled the famous Goodwood Hillclimb. Check it out.