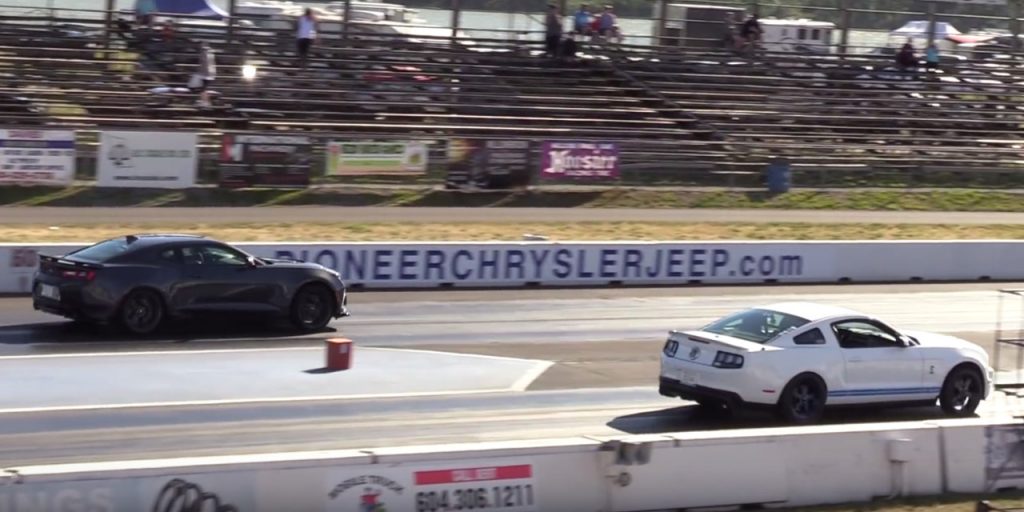 Today, the Ford Mustang/Chevrolet Camaro rivalry is as hot as it’s ever been, with Ford’s new-for-2018 Mustang GT now besting Chevrolet’s Camaro SS by all of 5 horsepower, and offering a more aerodynamic design, available MagneRide suspension, and an independent rear suspension to match.

However, if it’s a supercharged pony car battle you’re after, you’ll have to step back to at least the last-generation Shelby GT500 built from 2013 to 2014. That car set a new standard for factory pony car horsepower with a potent, 662-horsepower blown V8, which went unsurpassed until Dodge//SRT brought out the 707-horsepower Challenger Hellcat for 2015. Even today, the S-197-based Shelby GT500 offers more all-out grunt than Chevrolet’s current, 650-horsepower Camaro ZL1, although the gap is rather a small one.

Unfortunately… that’s not the face-off we’re seeing today. In the video above, a supercharged Shelby GT500 does indeed go up against a current-generation Camaro ZL1 at the dragstrip, but the Shelby Mustang in question is the previous (2011-’12) version, motivated by a 550-horsepower supercharged V8. The uploader of the video doesn’t provide any sort of clues as to what power modifications might have been made to the car from new, but assuming minimal upgrades, the Shelby is at a significant disadvantage in the power department.

Despite that, can the old S-197 Shelby GT500 manage to beat the sixth-gen Camaro ZL1 in the quarter-mile? Watch the video to find out.

And of course, bear in mind that win or lose, there is an all-new Shelby GT500 Mustang on the way – one that, according to Ford, will produce in excess of 700 horsepower. How much more than 700 is anyone’s guess, but rumor has it that the new Shelby-branded pony car could pack as much as 772 horsepower from a supercharged 5.2-liter V8.