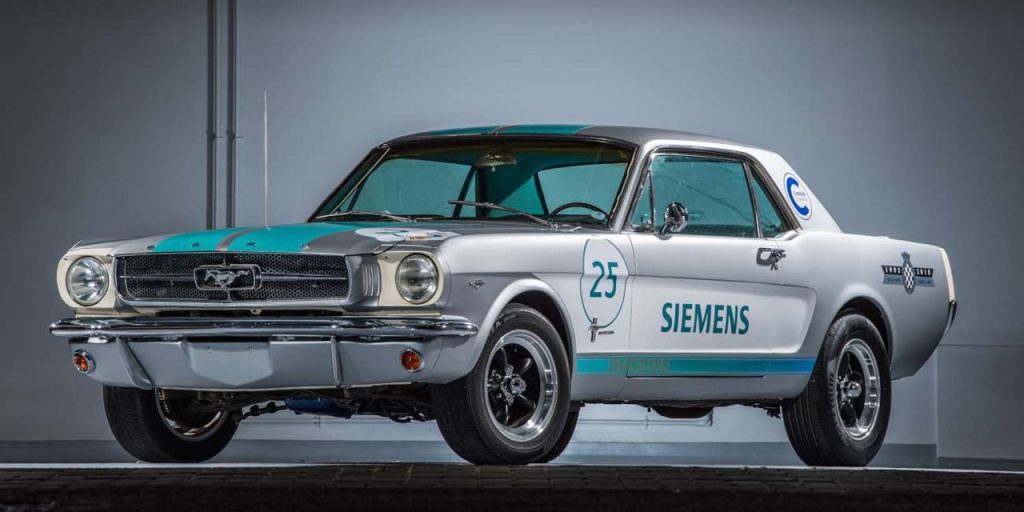 German automotive supplier Siemens will break new ground at this weekend’s Goodwood Festival of Speed, deploying a self-driving car on the famous Goodwood Hillclimb for the first time ever. But even more astounding than the feat itself is the company’s choice of car: a 1965 Ford Mustang.

The classic, 53-year-old American pony car has outfitted with a suite of automation controls and modern computing power by Siemens, working in conjunction with England’s Cranfield University, and we have to imagine it’s the first car of its kind. The Mustang will use GPS and 3D location scanning tech from Bentley Systems to make its way up the 1.16-mile hillclimb, while a human keeps watch from the drivers seat, ready to take over if needbe. As cutting-edge as the car’s autonomous components are, the powertrain is comprised of the same 289-cubic-inch V8 and three-speed automatic it’s had since new.

The Siemens self-driving 1965 Ford Mustang’s livery reflects the nature of the car itself: classic, with a touch of the computer age. The body’s been painted silver in observance of the Goodwood Festival’s silver (25-year) anniversary, and it features a pair of broad, light blue Le Mans stripes. Look closely at those stripes, however, and you’ll see a pattern of faint zeros and ones – a nod to the car’s onboard computational power. Siemens’ autonomous Mustang will run the Goodwood Hillclimb twice every day from July 12th through the 15th, although it won’t be the only self-driving machine to participate; an automated race car from Roborace – a forthcoming racing series featuring autonomous EVs – will also drive the hillclimb.

“It’s the first time we have done anything like this and yes of course it is fun to do it for the Festival of Speed, but it also makes you think what cars might be like in the future,” says Siemens Head of Marketing Communications Lee Dryden. “Siemens is preparing for an increasingly autonomous future and this is part of that. Maybe there will be cars we can sleep in or watch a film in while they drive us to where we want to go. The Mustang raises those sorts of questions.”

No disrespect, Lee, but you probably don’t want to catch a film in a car that’s driving like stink up a curvy hill course. That sounds like a recipe for nausea.