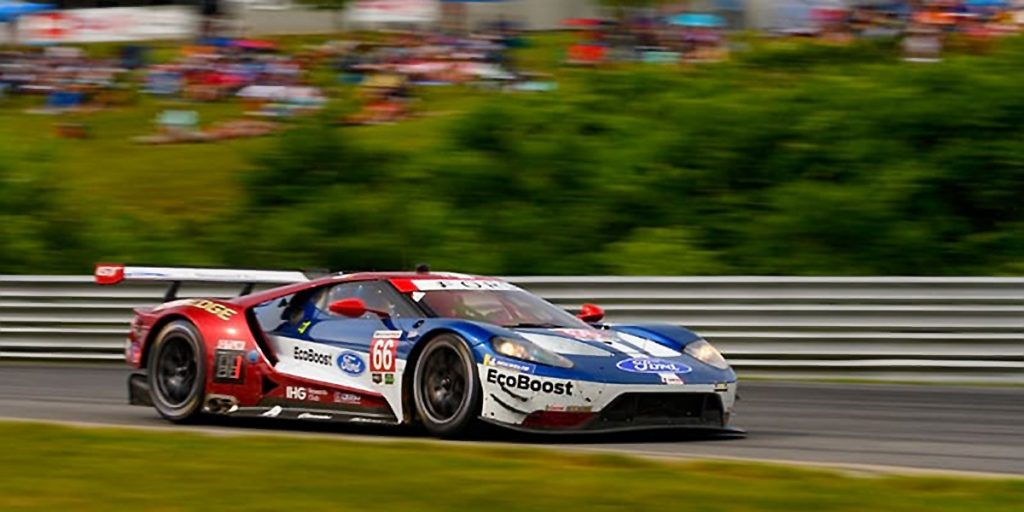 Ford Chip Ganassi Racing and the mid-engine Ford GT supercar took their third consecutive win in the 2018 IMSA WeatherTech SportsCar Championship over the weekend, seizing victory at the Northeast Grand Prix at Lime Rock Park in Connecticut. The No. 66 Ford GT of Joey Hand and Dirk Mueller had the honor of crossing the line first, after two hours and 40 minutes of spirited battling on track.

The No. 66 Ford GT qualified in third ahead of the race, with the No. 67 car of Richard Westbrook and Ryan Briscoe starting two positions back in fifth. After showing strong, consistent pace for more than an hour, the No. 66 car had improved its position by one by the time of its last pit stop, just over an hour from the end of the race. Trailing some 12 seconds behind the race leader, the No. 3 Corvette C7.R, Hand pushed, cutting through the slower-moving GTD traffic expertly as the Chevrolet faltered, and passing for the lead with 13 minutes left on the clock.

“It’s just amazing,” Hand said after the Northeast Grand Prix race. “We knew this race was going to be about being around at the end. We knew tire longevity was going to be key here, and you have to be impressed with Michelin and our tires. They went the distance when we needed them to because I was 12 seconds down there, and that set of tires, we were hard on them.

“I could see I was reeling [the No. 3 Corvette] in. He was struggling in traffic and I was making some moves in traffic that were really aggressive, including getting in a full-on battle with the leading GTD cars. It’s the last stint and you have no choice.”

The team’s sister car, Westbrook and Briscoe’s No. 67 Ford GT, came home in sixth, losing one position during the race to the No. 911 Porsche 911 RSR.

With that, Hand and Mueller of the No. 66 Ford GT now lead in the championship standings by one point over the No. 3 Corvette of Jan Magnussen and Antonio Garcia, with the No. 67 Ford GT just another point behind in third. Ford leads in the Manufacturers standings by 11 points.