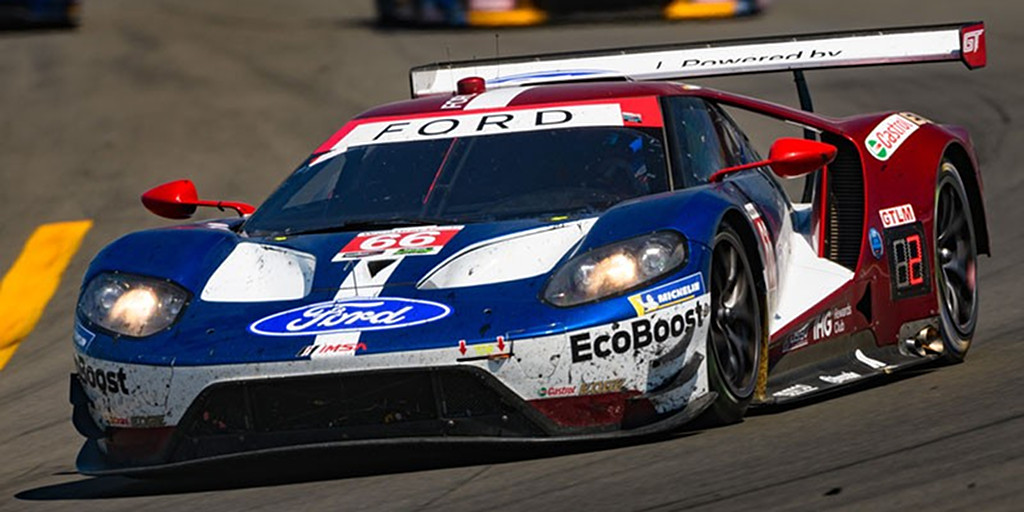 The No. 66 Ford GT of Dirk Mueller and Joey Hand took first place in the GT Le Mans class at the Sahlen’s Six Hours of the Glen at Watkins Glen over the weekend, picking up its first win of the 2018 IMSA WeatherTech SportsCar Championship season. Their comrades Richard Westbrook and Ryan Briscoe in the No. 67 Ford GT were forced to take a sixth-place result at the race despite dominating in Qualifying and starting from pole, as the car suffered a front roll bar breakage, impairing its handling.

The break occurred at the time of the No. 67 car’s first pit stop, roughly an hour into the race. “The car was obviously very difficult to drive,” said driver Richard Westbrook after the race. He set the fastest lap of the six-hour event in the GTLM class, running an impressive 1:42.872. “That’s a key part of our set-up, to have some roll support. It’s a little hard to take because the weekend promised so much. But when it comes down to it, lady luck wasn’t with us. I’m really happy our teammates were able to win.”

Yet it was the slower of the two Ford GT race cars that brought home the win at the Six Hours of the Glen, after Joey Hand’s brilliantly-executed fuel-sipping strategy allowed the car to cut its final refueling stop short and get right back out on track. Taking over for the final stint, Dirk Mueller drove all-out to fend off the No. 3 Corvette C7.R (second) and No. 911 Porsche 911 RSR (third), scoring the No. 66 car’s first win since Road America in 2017.

“We worked on our race car all weekend,” Hand said after the race. “We didn’t have the fastest car. The No. 67 had a great weekend, actually, and we just kept working at it.

“We made changes this morning in warm-up. That’s one thing we do well as a team on the No. 66 car; Dirk and I have been driving together so long and we know each other so well, we always try to make a racecar, thinking ‘what kind of car do we need to pass on the dirt and gravel?'”